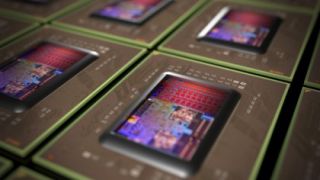 AMD could soon be refreshing its Polaris series of graphics for the laptop market, according to multiple leaks.

This new mystery mobile GPU also seems to appear in 3DMark’s benchmark database, first reported by Overclock3D. With a purported Sky Diver score of 15,677, the AMD Radeon RX 560X could be three times more capable than some laptops equipped with Intel’s integrated graphics.

That said, the rumored results also sees AMD’s updated Polaris graphics chip lagging behind the Nvidia GTX 1050, which performed admirably in the Asus ROG Strix GL503 with a Sky Diver score of 17,468 points.

The leaked benchmark also lists a 1,275MHz core clock speed, which if true, would make it just 73MHz faster than the supposedly outgoing AMD Radeon RX 560M. Otherwise, the rumored AMD Radeon RX 560X seems to retain the some of the same general specifications as its predecessor including 4GB of GDDR5 video memory and 1,200MHz memory bus clock, though there’s no mention of core counts.

There might be all sorts of new processor news, especially with new Coffee Lake CPUs on both mobile and desktop launching last week, but the graphics side of computing has been incredibly quiet. So, we’re looking forward to any developments in this space.