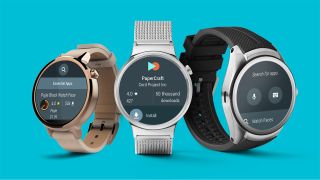 Update: After missing its initial launch target, the big update has officially hit the Asus Zenwatch 3.

It’s a big moment for Google’s wearable operating system, with Android Wear 2.0 now launching and bringing with it a whole range of new features and improvements.

These include more personalized watch faces, an on-watch version of the Google Play Store, more ways than ever to reply to messages and the new Google Assistant being brought to your wrist.

And while you might be tempted to get a shiny new Android Wear smartwatch to mark the occasion, such as the LG Watch Style or LG Watch Sport – both of which have launched alongside the Android Wear 2.0 update - there may not be any need, as Google is updating existing watches now.

Below we've listed every Android Wear watch so you can learn whether your device is getting the update soon, has it already or whether you're going to miss out on the new software.

Google has confirmed it will be updating a number of devices by the end of May 2017. Here are the devices waiting on the update:

Essentially a sportier version of the Moto 360 (2015), the Moto 360 Sport stands out through its built-in GPS, so you can track your runs without your phone, and through its fairly low price, which puts it more in competition with fitness trackers than smartwatches.

It’s not as readily available as it once was, but if you already have the 360 Sport, Android Wear 2.0 should breathe new life into it whenever it releases.

An affordable price tag and a comfy fit are key selling points for the Asus ZenWatch 2, as is the fact that you can get the watch in two different sizes, so those with smaller wrists won’t be left out.

It’s far from the best Android Wear smartwatch, but even now it remains one of the best value ones, and with the eventual update to Android Wear 2.0 it could be a viable option for a long time yet.

Motorola’s second generation smartwatch is a significant improvement on the first, improving the already great design and the previously mediocre performance to make for a wearable that you’ll want to wear.

If only Motorola would ditch the infamous flat tire screen (and launch the new Android Wear software), this would be one of the very best smartwatches around.

Stylish, circular and packing LTE connectivity, the LG Watch Urbane 2nd Edition LTE is one of the most premium and feature-packed Android Wear devices around – though it’s now going to be playing second fiddle to the LG Watch Sport.

LG stated that this model will receive the update in May, however that date has since come and gone.

Some devices aren't getting Android Wear 2.0 at all. If you device is on the list below, you'll have to buy a new wearable to get the new software.

Here's the list of watches that already have Android Wear 2.0 onboard or have it ready and waiting to download right out of the box.

The Asus ZenWatch 3 isn’t the budget option that previous entries in the range were. Instead it’s a stylish smartwatch with great battery life and a quality (and this time circular) screen.

Its use of proprietary straps is a shame and it lacks sporty features, like GPS and a heart rate monitor, but as a smartwatch rather than a fitness tracker it’s a strong choice.

This smartwatch has recently received the AW2.0 update, so owners can download that at once.

The Huawei Watch trades on style, with a premium build and a sharp, fully circular screen, bringing it closer than many wearables to replicating the look of a quality normal watch.

It’s not all that cheap, even now, and the battery life could be better, but with Android Wear 2.0 now rolling out, it’s hard to argue that it’s not worth the money.

Launched at the same time as the LG Watch Sport, the Watch Style is a touch cheaper and come with a slightly more attractive design. It still has Android Wear 2.0 straight out of the box too.

Huawei's latest wearable - the Huawei Watch 2 - is running Android Wear 2.0 as soon as you buy the smartwatch.

While far from tiny, the Fossil Q Wander is sleek and elegant compared to most smartwatches. It’s got a stylish design and easily changeable straps. Otherwise, it’s a fairly standard option and the good-looking build is hampered slightly by its flat tire screen, but it’s still one of the better-looking Android Wear watches you’ll find for the money.

Better yet, Fossil has stated that this smartwatch now has Android Wear 2.0.

The LG G Watch R is getting on a bit now, but its presence in this list shows that it hasn’t been abandoned.

At launch, it was one of the best smartwatches on the market, with a round display, a watch-like look and solid performance. It’s since been topped by any number of rivals, but some of those said rivals don't have Android Wear 2.0 like this watch does.

A pricier alternative to the G Watch R, the LG Watch Urbane was positioned as a stylish wearable, that’s as much fashion accessory as piece of tech.

It was semi-successful, though held back by its high price – a price which has since plummeted, which along with the news of its impending update to Android Wear 2.0 all the more likely to make the Watch Urbane desirable again.

The Fossil Q Founder is a good-looking watch, which is perhaps no surprise since it comes from a company with years of experience at making timepieces.

But it’s also got slightly beefier specs than some Android Wear watches, though it still doesn’t solve the size problem faced by wearables, and like the Fossil Q Wander it has a flat edge at the bottom of the screen, spoiling the illusion that you could be wearing an analog watch.

All said, the Android Wear 2.0 should be live for this model.

Rugged rather than stylish, the New Balance RunIQ is built for athletes, with built-in GPS and heart rate monitoring, plus a water-resistant build, so you can wear it anywhere.

Another sporty option, the Polar M600 has built-in GPS, a water-resistant body and strong fitness software. The chunky design and low-res screen do mean you might want to take it off once you’re done in the gym though.

Polar was one of the early adopters of Android Wear 2.0 and users should be able to enjoy the new software right now.

The Michael Kors Access Bradshaw may well be the most watch-like smartwatch around, which is no surprise when you consider that an analog version also exists.

It’s slightly chunky and not cheap, but it’s got all the key specs you’d expect from a high-end, fashion-focused wearable.

Word has it that both Michael Kors watches are now Android Wear 2.0-enabled.

The Michael Kors Access Dylan is arguably slightly less showy than the Bradshaw, but otherwise it’s much the same, with good looks, good specs and a fairly high price, which is slightly more justifiable now it’s being updated to Android Wear 2.0.

There are sporty smartwatches, and then there’s the Nixon Mission, which can survive being submerged up to 100 meters deep and has an all-round rugged build, so you can genuinely wear it anywhere, now with Android Wear 2.0 enabled.

The Casio Smart Outdoor Watch could give the Nixon Mission a run for its money. With waterproofing to just 50 meters it loses out on that front, but it is built to meet US Military Standards. It also looks ridiculous, but if extreme durability and waterproofing matter to you then style probably doesn’t.

Also known as the Casio WSD-F20, the Casio PRO TREK Smart is the successor to the Casio Smart Outdoor Watch, and it’s every bit as rugged. Key features include GPS and offline maps, plus a clever dual-layer display, and now, of course, Android Wear 2.0.

If you’ve got more money than sense but don’t fancy a tricked-out Apple Watch 2, then the TAG Heuer Connected could be for you.

Money aside, this is quite possibly the best Android Wear watch around, with a premium design and top specs, but with a price tag of $1,500/£1,100 (around AU$2,100) money can never be put aside. It’s a good thing this watch now has Android Wear 2.0, as at that price it would almost be a crime if it didn’t.