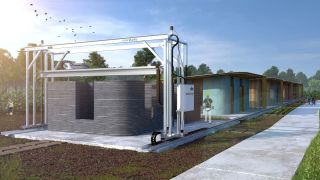 Most developing nations suffer from the problem for not having enough shelter, which is why to solve this issues Icon has partnered with New Story to build cheap homes for citizens that can be set up under 24 hours.

Icon, a 3D printing firm and New Story, a non-profit, cited the significance of this project in relation to the WRI Ross Center for Sustainable Studies report from 2017. Their research found that 1.2 billion city-dwellers, globally, don’t have the privilege of affordable and secure housing.

To address this issue, they’re currently testing a prototype of Icon’s mobile 3D printer, in which houses can be printed for under $4000, which is approximately Rs 2.6 lakhs. Assuming their test is successful, this would considerably bring down the price of housing in a large proportion of the world.

Icon showcased one of these homes at the SXSW (Southwest Interactive) festival, that’s currently happening in Austin, Texas, their home town. The house is essentially a single story model that measures around 600-800 square feet. What more fascinating is that, it can be built on the Vulcan 3D printer in under a day.

According to Icon, the efficiency and money savings don’t compromise on the build of the house as the structure is made using, “cutting-edge materials tested to the most recognised standards of safety, comfort, and resiliency.”

These home cater to the needs of developing nations further by claiming to use ‘nearly zero’ waste production methods so it won’t add to the pressures of garbage disposal. In addition to that, these home are made under the assumption that there will be ‘unpredictable constraints’ such as limitations on water and power.

New Story is a Y Combinator backed non profit, which is a new model for funding early stage startups. They focus on building communities that are sustainable enabling them to offer education, basic infrastructure and income opportunities for its residents.

Collaboration between the two firms, will allow for local labour to operate the machines and feedback from users will allow for customizations where they’re required, and feasible.

The Verge has reported that the first project that their partnership plans on executing will happen in El Salvador, where they will build a community of a 100 homes in 2019. It will start once the company finalizes the design and completes their testing of materials.