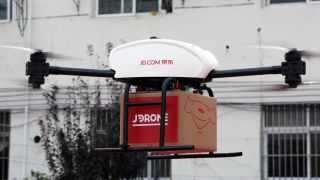 Two weeks ago, a GoPro Karma drone crashed into the audience at a Major League Baseball game in San Diego. The pilot was identified, but local police weren’t familiar with the Federal Aviation Authority’s newly minted rules regarding safe use of drones, so he was let go without charge.

Accidents like this tend to receive lots of media coverage, with dramatic videos and dire warnings that next time it could be your head in the flight path. Meanwhile, organizations like the FAA and national governments respond by putting ever tighter restrictions on unmanned aircraft.

It’s essential to protect the public, but are these measures the best way to do it? How can the drone industry itself help make craft safer to fly, so pilots don’t have their wings clipped by zealous regulations?

That was the hot topic at CES Asia today, where experts from major drone manufacturers and law firms cracked open the industry’s shell and revealed the incredible amount of work that’s taking place to make unmanned aircraft safer for everyone.

The speed of flight

The heart of the problem is speed. Consumer drones have become incredibly popular in the space of just a couple of years, with safety rules and standards being written on the fly. Paul Xu, vice president of DJI, explained how it all happened so fast: “For the first five years, DJI was mainly making flight controls for helicopters, then in 2009 we started to sell quadcopters,” he said. “Previously, they had mostly been home made, but we made them commercially available.”

The first drones were built or bought by people who enjoyed simply flying them around as a hobby, but that started to change in 2012 when DJI realised that there were more keen amateur photographers than model aircraft enthusiasts. “We worked with people in Hollywood, and made a professional drone for TV series,” said Xu, who calls this the second phase of drone development. “That meant that we had to move into new tech like gimbals and stabilizers. Previously gimbals were very big and expensive, but we made them much smaller, which made aerial photography very cheap.”

The third phase of the drone’s evolution involved cutting size and price, while making the craft easier to control, and phase four sees drones shifting a gear and finding new commercial uses. These include mapping and surveying, carrying out inspections of large equipment, and delivery.

Despite the noise made by companies like Amazon and Pizza Hut, delivery drones have yet to take off in the US or Europe, mostly being a PR tool rather than anything practical. In China, however, they’re already commonplace, and safety measures are being crafted as quickly as possible to keep up.

JD is one of the country’s biggest online stores, and is writing the rulebook for drone deliveries. Not only are its unmanned craft already bringing packages to customers’ doorsteps, it’s currently working on a craft that can transport goods weighing up to a ton. To put that into perspective, that's the same weight as a Smart car, complete with driver, drifting over your head.

For drone delivery on such a massive scale, avoiding trees and baseball games is just the start – drones have to find their place alongside planes and other commercial aircraft, which means rethinking the way the skies are managed.

JD is working to make its craft easier for airlines to identify, but has had limited success so far. “We tried making our drones’ shape very strange and using a metal shell,” Cheng said, “but we found those solutions don’t give very much benefit.”

Instead, the company is now investigating automatic dependent surveillance broadcast (ADS-B), which involves a craft broadcasting its GPS position at regular intervals. “Most of our airlines [in China] have just set up ADS-B and it’s not just for big airplanes, so we can tell the base station and the airline, ‘OK, we are here, here’s our ID. So I think the airline and the station will treat our drone like a normal airplane. In that sense, I think our drone can be part of the whole airline operating system, and that can be the solution to safety.”

DJI is also building ADS-B into its consumer drones to help them work in harmony with commercial airlines, adding to the set of safety protocols and technologies it already uses.

These include Sense and Avoid, which helps avoid crashes with trees and buildings – even when the drone is returning to home automatically.

Each of the company’s drones also comes with no-fly zones programmed into the controller. These include areas around military facilities, airports, and the centre of busy cities like Beijing and Washington DC where airspace is tightly regulated. “We’re updating these zones according to regulations, but it’s a process,” said Paul Xu. “There’s no clear definition of the areas where you can’t fly yet.”

It might sound inflexible, but in the US, DJI is trialling a service that lets people like aerial photographers verify their identity to fly within areas that were previously blocked. “We know who they are, and if they violate local protocols,” explained Xu. If the pilot at the ball game had agreed to fly responsibly near the park, this rule would have made it much easier to find and prosecute him.

Some local governments in China have asked that drones be connected to certain networks so they know about drones above certain weights, flying above particular elevations, and who is controlling them, and the company has complied, helping to build a good relationship with the authorities.

This kind of co-operation is paying dividends; China’s government has recognized the potential for drones to boost the country’s economy, and is even subsidizing agricultural models for crop spraying.

The drone industry is clearly keen to police itself, and work with law enforcement, governments and airlines to make the skies safer.

Lu Zhou is the Beijing counsel for international law firm Hogan Lovells, which has a special team dedicated to drone-related regulation and investment in the US, Asia and Europe. She explained that HL’s lawyers take their lead from the industry, and says Chinese policy is starting to have an effect on drone safety rules around the world.

“We follow the technical people in the business,” she said. “In our experience, a risk-based approach is better than over-regulating actions because of overwhelming media attention.”

However, despite all this hard work there’s a safety issue that dates from the earliest days of unmanned quadcopters.

Although companies like DJI and GoPro have made drones affordable and easy to fly, there are still lots of enthusiasts who build their own craft and run them using open source software that lacks geofencing and other limitations that are built into commercial models. It’s not a problem for the kind of home-brewed quadcopters used in drone racing, which are flown around carefully planned and controlled courses, but it's a different story for people using their own craft in public – however honest their intentions.

This is a big concern for Paul Xu – not because DJI wants to stifle creativity, but because rogue DIYers risk endangering lives and the reputation of the industry as a whole. One bad accident could have massive implications, even if it’s not a consumer craft and there’s no way to trace who made it.

There’s no clear solution to this problem, but Lu Zhou suggests that although drone operators shouldn’t require a license, manufacturers should. Doing so would put safety in the hands of the industry itself, reduce the likelihood of knee-jerk reactions, and help improve the image of drone-flying among the public.

So would you feel comfortable with a drone carrying a ton of bricks over your house? Perhaps not yet, but the industry is working hard to change your mind.