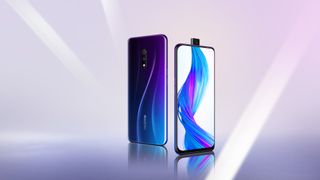 The much-awaited Realme X has been announced alongside the company's budget entry, Realme 3i in India. While the Realme X brings some premium features to the mid-range segment such as the pop-up camera and 48MP rear camera, it retains certain hardware from the Realme 3 Pro. The Realme X will go up against the likes of Samsung Galaxy A50, Vivo Z1 Pro, Redmi Note 7 Pro and Redmi K20.

Realme 3i will also be available in two variants starting at Rs 7,999 with 3GB RAM and 32GB storage. The second variant is priced at Rs 9,999 and has 4GB RAM and 64GB storage.

The first sale is scheduled for July 23 on Flipkart and Realme India store.

Realme X features a 6.53-inch AMOLED display with a Full HD+ (2340 x 1080 pixels) resolution and a 19.5:9 aspect ratio. The display is topped by a layer of Corning's Gorilla Glass 5 for added protection. It is powered by Qualcomm Snapdragon 710 chipset with an octa-core CPU and Adreno 616 as the GPU.

There's a 48MP primary camera on the Realme X with an F/1.7 aperture and a 5MP depth sensor. On the front, a 16MP camera for selfies is housed in the pop-up camera module.

It is also fitted with an in-display fingerprint sensor and has a 3,765mAh battery to boot. The phone also supports 20W fast charging courtesy of VOOC 3.0 and comes in Steam White and Punk Blue colour options.

In addition, the company is also bringing the special Realme X Master Edition in Onion and Garlic gradient colours along with the Spider-Man: Far From Home gift box edition.

The Realme 3i features a 6.2-inch HD+ (1520 x 720 pixels) resolution display which is protected with a layer of Gorilla Glass 3. It is powered by MediaTek Helio P60 chipset which is paired with 3GB RAM + 32GB storage and 4GB RAM + 64GB storage. Users also have a choice to expand storage by upto 256GB via microSD card.

On the back, the Realme 3i has a 13MP primary camera with an f/1.8 aperture accompanied by a 2MP depth sensor. In addition, there's a 13MP front-facing camera for selfies.