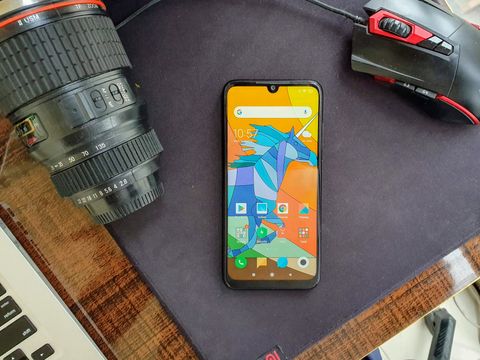 The Redmi Note 7 Pro is the most refreshing Redmi Note upgrade till date. At Rs. 13,999, it has something for everyone. A good camera, best in class performance, impressive battery life and a new design. Xiaomi, once again, raises the bar for the entire segment.

Update: We've updated our Redmi Note 7 Pro review after installing the final build of MIUI 10 on the review unit.

The Redmi Note 7 and Note 7 Pro mark Redmi's rebirth after a four-year-long dominance in the affordable smartphone segment. After the Redmi Note 3, we saw some iterative upgrades in terms of design and display, but its unchallenged value for money proposition made Xiaomi the segment leader over the years.

On February 28, 2019, Redmi launched its first phones as Xiaomi's sub-brand in India — the Redmi Note 7 and Note 7 Pro. The Redmi Note 7 Pro, especially, is a completely revamped handset compared to what we have seen on previous Redmi Note phones. The biggest and most evident change is the design, and the biggest upgrade is the rear camera. The performance also gets a boost with Qualcomm's latest 600-series chipset.

With all that in the mix the Redmi Note 7 Pro is a combination of good design, latest hardware and handy features. It is the latest in a recent wave of mid-range smartphones that look like flagships, but is it going to be on top of them all? We find out.

While we are not sure about the offline availability, Xiaomi will continue to hold flash sales for the phones on the e-commerce platforms.

The Redmi Note 7 Pro is a mid-ranger that looks like a flagship.

After long, there's finally something new to talk about Redmi Note's design in detail. As mentioned, it's a refresh over the standard aluminum build. The Redmi Note 7 Pro's design isn't something we haven't seen before. We have witnessed a similar design language, material and finish on Honor and Huawei phones earlier.

However, Xiaomi claims their implementation of this build and design is of superior quality and ensures longevity. It has Gorilla Glass 5 protection on both sides, with a body colored metal rim running around the edges. The company claims that the device is so solid, you can even break a walnut with it. We weren't brave enough to test that, but we did find it well built. As per the company, the phone is splashproof as they've added a rubber layer around all the openings that could lead to water damage. But, that doesn't mean you can submerge it under water or keep it constantly under the shower.

The Redmi Note 7 Pro is of the same size as the Redmi Note 5 Pro and 6 Pro, but the screen size is slightly bigger this time. That's because the notch is now shrunken. It may not be the best size for everyone's hand, but it certainly is the standard size that the majority prefers.

While glass is more fragile than plastic, it's still less prone to scratches if you're worried. If the weight of the phone is one of your concerns then be warned that the Note 7 Pro weighs 186 grams, which is the highest in its range. To put things into perspective, Samsung's Galaxy M30 with a 5000mAh battery weighs lesser at 175 grams. However, we don't find the Note 7 Pro to be unusually bulky, instead, it feels solid and even the weight distribution is done well.

It has 2.5D curved glass on both sides and the rim is also rounded. For someone who has big hands like me, the Note 7 Pro is a perfect fit as my thumb lands right between the lock button and volume button while holding the phone in a natural way. Also, there are no fine edges to dig into your hand. What I personally liked is that Xiaomi has finally ditched the iPhone-like vertical camera design. The cameras are still vertically stacked, but the resemblance to iPhone X is now gone.

The rear fingerprint scanner is in the middle of the phone and easy to hit, with the ridged edges easily identified when extending a digit.

Further, there are small but noticeable design elements like the new 'Redmi by Xiaomi' branding at the back, body colored frame, under the glass LED flash and gradient shades. It comes in two gradient colors-- Neptune blue and Nebula red, which is new for Xiaomi, but the trend is seen across all mainstream OEMs lately.

The Redmi Note 7 Pro has a 6.3-inch FHD+ LTPS in-cell display instead of an IPS panel. This is because LTPS in-cell display consumes less power, has faster refresh rates and generates less heat. While we're not sure exactly how big a difference that makes, we can say that there's no compromise on the visuals.

Redmi Note 7 Pro's new dot notch design makes for a 19.5:9 aspect ratio of the screen. It is also the first Redmi Note phone with a u-shaped notch on the front.

The display seemed to be justifying the price tag it comes at. Color reproduction was a little cool for our tastes, but the MIUI software has ample screen tuning abilities built in. We switched to the ‘warm’ preset, which improved things considerably.

Compared to its competitor Samsung Galaxy M30, it lacks the overall image quality you’d get with an OLED display. If you don't already know, AMOLED panels are punchier and crisp compared to LCDs. Still, off-angle and outdoor visibility are better than we’d expect from a phone of this price.

The fact that the screen isn't actually bezel-less and has thick visible borders on all sides might disappoint users looking for an edge to edge experience or higher screen to body ratio. The Redmi Note 7 Pro offers 81.4% of screen-to-body ratio while competitors like the M30, Realme 3 and Asus Zenfone Max Pro M2 offer more than 88%.

In a nutshell, the display isn't a bad one for its price, but it's not one of the strong areas of the Redmi Note 7 Pro.

Next Page Camera and software