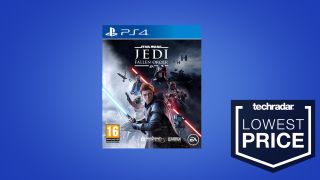 EA finally released a great Star Wars game this year after over six years with the license, and now you can save money on it. Jedi: Fallen Order, which only released in November, is now $20 off at Walmart just in time for the holidays, on both PS4 and Xbox One (not in the US? Scroll down for Jedi: Fallen Order deals where you are).

In this game, you play Cal Kestis, a young Jedi Padawan who never finished his training before Order 66 kicked off, which led to the extermination of most of the Jedi. Cal uncovers his memories of the Force as you play, gaining more powers as you go, and replicating a Metroidvania-like design where different parts of the game's worlds open up depending on which abilities you have unlocked.

Star Wars Jedi: Fallen Order PS4: $39.99 at Walmart
The best Star Wars game in years, at its best price so far. We saw Jedi: Fallen Order's more expensive edition drop to $49.99 over Black Friday, but not the regular edition. Enjoy this Dark Souls-y trip to a galaxy far, far away for $20 off. View Deal

Star Wars Jedi: Fallen Order PS4: $39.99 at Walmart
Save $20 on the Xbox version of this Star Wars adventure. This Dark Souls-y trip through a variety of Star Wars planets is exactly what fans wanted after years of shaky games based on that universe. View Deal

The game ends up feeling like Dark Souls lite in some ways, with a heavy focus on parrying, dodging and repeating sections where you died to retrieve experience points. But it's satisfying to learn, and it's a beautiful-looking game, too, with planets like Kashyyyk and Dathomir from the Star Wars universe to explore. For this price, it's well worth it.

Not in the US? Check out the best prices on Jedi: Fallen Order where you are below: