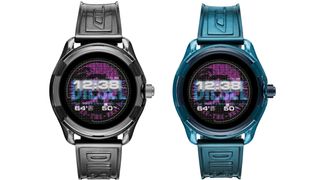 If you’re after a smartwatch that will turn heads but won’t cost the earth, then the newly announced Diesel On Fadelite might fit the bill.

Unveiled at CES 2020, the Diesel On Fadelite has a transparent strap and an iridescent case, coming in a choice of red to black, black to clear, blue to clear, or all clear. The case has a translucent, hard shell enclosure, that’s lightweight and durable, and at 43mm the case is a little smaller than some watches, ensuring it’s suitable for both men and women.

The Diesel On Fadelite also offers new dials, including two that feature the artwork of Mad Dog Jones, and one that features a rotating globe with additional time zones.

Other standout features include a weather tile with automatically updated conditions, and Spotify installed out of the box.

Beyond these things this is a fairly standard Wear OS watch, but one with most of the features you’re likely to want. That includes GPS, a heart rate monitor, a speaker, the Snapdragon Wear 3100 chipset (which is the most powerful one you’ll find in a Wear OS watch), Google Pay, a swim-proof design, activity tracking, and smartphone notifications.

And while that’s a fairly standard assortment of features, the Diesel On Fadelite’s £249 (roughly $330/AU$470) price makes it cheaper than the likes of the Diesel On Axial or Fossil Gen 5. Though if you want to buy it you’ll have to wait a little while, as it’s not hitting stores until March.