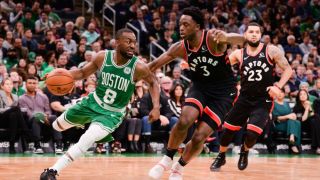 Two of the best teams in the NBA go head-to-head in a Christmas NBA clash today, with their sights still firmly set on the playoffs. It's the Boston Celtics at the champion Toronto Raptors and we'll explain where you can live stream NBA basketball from anywhere these holidays.

Boston Celtics vs Toronto Raptors - when and where?

The Boston Celtics will travel to the Scotiabank Arena to take on the Toronto Raptors.

It's a Christmas Day game with tip-off set for midday in Toronto. So that means 9am PT, 5pm GMT in the UK and 4am AEDT on Thursday in Australia.

The Raptors took home the big one last year for the first time in the Toronto franchise's history. This term hasn't been plain sailing so far - they go into this one with a 21-9 record - but they're still well placed to surge on towards another playoffs, with last season's Most Improved Player Pascal Siakam going big on points in this campaign so far.

The Boston Celtics sit second in the Eastern Conference and go in to this Christmas encounter on a three-game winning streak. Jayson Tatum has once again been one of the stars of the show, while Kemba Walker has shown why the Celtics have made him among the best paid players in basketball.

For Raptors fans in Toronto, Celtics fans in Boston and every other b-ball fan out there, we have all the information you need right here to watch a Celtics vs Raptors live stream - no matter where you are in the world and even if there's a blackout where you are.

The problems start if you're abroad while it's on (or can't see it due to a blackout) as your coverage will be geo-blocked by the broadcaster. It's certainly annoying, but yo can still watch (and you don't even have to slum it with a grainy, illegal feed you've found on Reddit) thanks to a VPN. These services let you change the IP address of your laptop or mobile to one in a different state or country which does have a stream. And it's not even hard to do.

How to live stream the NBA live online with League Pass

Although there are now a number of options for streaming the NBA online (which will go into further detail about below), avid basketball fans need to look no further than NBA League Pass.

If you want to follow your favorite team all season long or even if you want to keep up with every team in the league, the NBA’s own streaming service is our first choice for streaming basketball online.

With NBA Team Pass, you get access to every live game for one team with full replays and audio broadcasting available as well for $89.99/£99.99 a year. NBA League Pass gives you the same coverage but instead of having access to just one team’s games, you can watch live games for every team in the NBA for $149.99/£179.99.

Watch the NBA on TV in the US

In order to watch this NBA game on TV in the US , you’ll need either a cable package or a streaming service subscription that gives you access to ESPN. And if you want to watch on your mobile device, then the ESPN app will let you do that, too. Tip-off is at midday ET / 9am PT.

If you’re a cord cutter and don’t like the look of NBA League Pass, don’t worry as there are a number of streaming services that give you access to all the channels you’ll need to follow your favorite NBA team this season.

Here are a few of our favorite streaming services for watching basketball online:

How to stream Raptors vs Celtics live in the UK

Sky Sports and its Main Event channel are the place to catch tis festive game with a start time of 5pm GMT. Of course that means access on the SKy Go mobile, laptop and console app, too.

Not interested in subscribing to Sky Sports just to watch some basketball? Don’t worry as you can also purchase a Sky Sports pass from Now TV with daily, weekly and monthly options all available off contract.

Also remember that NBA League Pass is available in the UK and for die-hard basketball fans, it should be your first choice as it allows you to follow your favourite team or even every team in the league, all season long.

This one's on SportsNet and SportsNet Now, which you can get for $19.99 per month and will also allow you to livestream over 200 NBA games including the Raptors and the NBA Playoffs. If you just want to watch a few basketball games, the service also offers a 7-day pass for $9.99.

However, neither of these options will get you the same coverage as NBA League pass which allows you to stream one team, all the teams in the league or even all teams without commercials depending on which package you choose.

If you plan on watching the NBA from Down Under, then you’ll need a cable package that gives you access to ESPN as the network owns the country’s NBA broadcast rights. You can get a Foxtel subscription with the sports package included that will allow you to watch all of this season’s games on ESPN.

Today, you'll need to be ready to tune in at 4am AEDT.

Don’t want to sign up for Foxtel just to watch the NBA this season? Then the over-the-top service Kayo Sports has you covered as it will allow you to stream all of ESPN’s NBA content. It costs between $25 and $35 depending on which package you choose but new customers will be able to test it out for themselves thanks to the service’s 14-day FREE TRIAL.

NBA League pass is also available in Australia in case you want to watch your favorite team or even teams all season long.