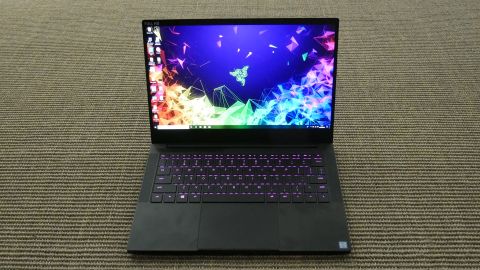 It's fair to say Apple has done a fine job popularising the 13-inch laptop form factor with its smallest MacBook Pro model, so It’s not a huge surprise to find Razer’s latest high-end 13-inch model aping Apple when it comes to some elements of the new Blade Stealth 13’s industrial design.

But don’t go thinking this is some kind of MacBook rip off. Razer has very much put its own high-quality ultrabook PC spin on the Blade Stealth 13.

Apart from the bad boy all-black styling, Razer has given the Stealth 13 some theoretical gaming props courtesy of Nvidia’s GeForce MX150 graphics chip in its more powerful 25 watt configuration and an 8th Gen Intel quad-core CPU, plus the promise of up to 11 hours of claimed battery life, all in a compact and ultraportable package.

Here is the Razer Blade Stealth 13 configuration sent to TechRadar for review:

But you’ll make do with 8GB of RAM, a 1080p screen and Intel integrated graphics. Our review system is the middle option priced at $1,599 Stateside and £1,499 in the UK (around AU$2,700) . It’s the strongest value proposition in the Stealth 13 range thanks to upgrades to 16GB of RAM and an Nvidia GeForce MX150 GPU.

If Razer’s laptops ain’t exactly cheap, one of the main justifications for the premium pricing is high-end design. Think of the Stealth 13 as a badass, all-black, Windows-powered alternative to a 13-inch MacBook Pro and you’ll have a pretty good idea of what to expect.

With a CNC-machined aluminum unibody, it’s cut from very similar cloth to a MacBook. Indeed, in terms of overall size, it’s within a fraction of a millimetre off the MacBook Pro 13 for width and thickness and just a few millimetres larger in depth. Depending on specification, it weighs from 1.28kg to 1.38kg, and so right on the MacBook 13 money, too.

Razer has also furnished the Blade Stealth 13 with 4.9mm-thin bezels on each side of the display. There’s a bit more of a brow bezel and then a fairly substantial chin. But overall, it’s pretty compact for a 13-inch rig.

It’s also conspicuously restrained for a brand that’s very much associated with gaming. As slick as the Stealth is, it would also look plausible and thus not embarrassing in a work context.

For the record, the Stealth’s diminutive power supply very much lives up to the name. It’s small enough to add very little burden on the move.

The 13-inch display of the Razer Blade Stealth 13 is particularly impressive. Highlights include punchy and vibrant colors, great viewing angles, decent pixel response and a nice matte anti-glare coating that avoids both reflectivity and annoying sparkle.

Factor in the aforementioned slim bezels and the overall impact is pretty awesome. As configured here, it's a 1080p IPS panel limited to 60Hz refresh. That's a good fit with the Stealth 13's graphics subsystem if you're particularly into gaming, as there's little chance of driving higher refresh rates and resolutions.

On the other hand, Razer does offer an upgrade to 4K with touch input. For gaming, that’s not much of a benefit given there’s zero hope of gaming at 4K with the GeForce MX150 graphics. But you can opt to run the 4K panel at lower at lower resolutions with slightly compromised image quality and then enjoy the full 4K desktop experience with super-sharp fonts and the ability to view 4K video content the rest of the time, albeit at a fairly hefty price mark up.