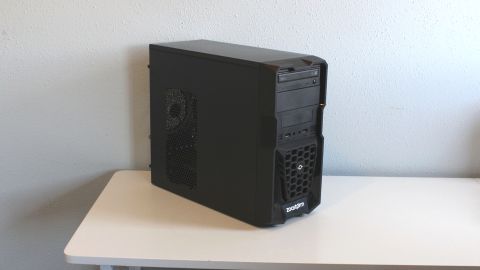 Gaming PCs were once treated like the poor relation of consoles, a far smaller niche market that was seldom a target platform for some of the larger game developers.

Recently, however, there has been a huge surge in interest for gaming on PCs, attracting attention from people who traditionally would have never considered buying hardware from anyone other than Sony (and its PS4), Nintendo (Wii U) or Microsoft (Xbox One).

PCs are still considerably more expensive than consoles though, so for people who are dipping their toes into PC gaming for the first time, a mid-range system such as the Zoostorm Gaming Desktop PC carries a relatively reasonably price tag. Our review sample was provided by online retailer eBuyer and currently carries a price tag of £499 (around $705, AU$953).

At that price, it's more likely to appeal than a more expensive, high-end system and is very good for a gaming PC. At the high-end, a single graphics card alone costs more than a current-generation console, as does the sum total of added extras like a water-cooling setup, powerful PSU and fancy-looking case.

Without these extra and high-end components, you won't be getting a PC that's much cop at 4K gaming, or for use with 144Hz displays. This is a mid-range system, and fairly entry-level as far as gaming PCs go. But it's enough to get up and running, and enjoy everything the PC platform has to offer.

The Zoostorm Gaming Desktop PC comes in a black case that is as plain Jane as it gets. Only the front gauze with the Zoostorm logo and red fan behind it give the machine much individuality.

It's certainly no looker, at least compared with some of the more striking designs, such as the Acer Predator G3. However, in the case of that machine, you're paying a premium for fancy design and aren't necessarily getting much, if any more power under the hood.

Windows 10 Home comes preinstalled with the Gaming Desktop PC. Thanks to Zoostorm being a smaller, custom brand, there are no tie-ins with McAfee antivirus, app stores, or other rubbish that comes on a lot of gaming PCs from bigger brands.

It's worth reiterating that as it stands, the price of the Zoostorm Gaming Desktop PC is (just about) reasonable enough to fit into a range that makes it an alternative option to purchasing a games console.

Both current-generation consoles have been criticised by some for being incapable of providing 60fps at 1080p resolution in all games. Can Zoostorm succeed where they have failed?

Next Page Performance and specifications