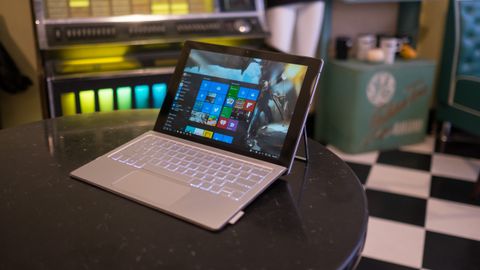 The HP Spectre x2 is a 12-inch Windows tablet with a lot of extra tech you might not care about, but its low price is too hard to pass up.

Updated: We've updated our impressions of the HP Spectre x2 after using the Active Pen to write documents and draw images.

With the Surface Pro 4 re-establishing Microsoft as the best Windows tablet maker, you can't find a slate that's not trying to emulate its design and success. From the Lenovo Miix 700 to the Dell XPS 12 and even the iPad Pro, everyone is getting into the pro-level tablet game with their own detachable device.

The Spectre x2 is HP's entry in the ever-expanding tablet-laptop hybrid category. While there's a striking resemblance between it and the Surface Pro 4, the Spectre x2 carves an identity of its own with a thinner body, fanless Intel Core M processors and a premium design.

Coming at a more affordable $799 (£799, AU$1,699) price point with a keyboard included, this 12-inch slate undercuts Microsoft's flagship tablet. But make no mistake: HP's 2-in-1 is a compelling device in its own right.

The HP Spectre x2 undoubtedly takes some design cues from the Surface Pro 4, and its forbearer, the Surface Pro 3. It has an unmistakably similar silhouette if you're at all familiar with Microsoft's tablet line. That said, there are a few key differences that make HP's convertible approach slightly unique.

For starters, the Spectre x2 features rounded edges that make it look more like a smaller iPad Pro, complete with a chamfered edge that runs around the perimeter of the casing. The tablet also has a silver and black color scheme split between the stamped aluminum chassis and a black glass panel, which conceals the rear-facing camera and wireless radios.

While the Spectre x2 isn't built from one uniform piece of metal, every panel fits together seamlessly. It's a spectacularly solid and astonishingly thin device with a sandblasted metal finish that elevates its industrial quality.

Kick your leg out

Rather than going with the kick-out panel that spans the width of the device, the Spectre x2 has a U-shaped, 3.5mm stainless steel bar for its kickstand. If you remember the '80s and '90s fondly, the Spectre x2 looks a bit like an oversized portable television from that era, reinvented as a high-end electronic device.

The kickstand bar is a welcome deviation from other tablets with a pop-out rear panel, because it leaves more space for the battery. All the while, U-bar allows the Spectre x2 to be as flexible to use as the Surface Pro 4. You'll be able to tip the tablet back as far as a 150-degrees, a fair bit more than the 135-degrees you'll get on the Lenovo IdeaPad Miix 700.

I just wish there were more ways to get at the kickstand. Because steel bar snaps into a trench on the back of the device when not in use, you have to rely on a single hinge release located on the lower left side of the tablet. The kickstand pops out with a satisfying spring-loaded action, but I would have preferred the whole assembly to extend to the edge of the device, so you could pull it open from three different sides.

Rocking out with the keyboard

HP knocked it out of the park with the Spectre x2's keyboard, and it even comes with the device at no extra charge. The keyboard is made with a solid sheet of aluminum, making flex virtually non-existent. Meanwhile, the fabric bottom is a soft texture to grip onto while toting the tablet around. The keys themselves are nicely spaced and offer a deep 1.5mm of travel. And the keyboard even magnetically clips to the Spectre x2's chin – just like the two most recent Surface tablets – to put it at an elevated angle for more comfortable typing.

However, the Spectre x2 keyboard's neatest trick is it incorporates an extra pair of speakers. With the keyboard attached, the HP Spectre x2 effectively has quad speaker audio setup. The extra pair of tweeters helps amplify the power of the tablet's two built-in, side-firing speakers. While this Windows 10 convertible can push out some major decibels, there isn't much depth to the sound.

Instead, everything from music to movies sounds flat, and there's a persistent tinny note that undercuts the whole audio experience. It's serviceable enough for movies, but if you're planning on listening to music for long stretches, you should plug in a pair of quality headphones.