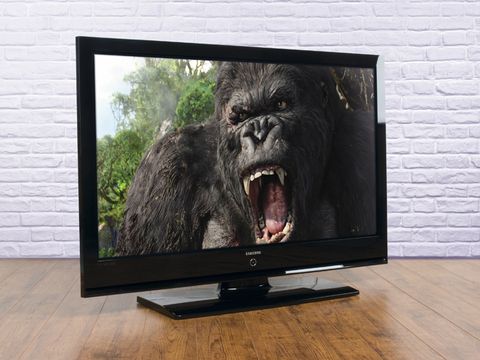 Visually it's every bit the hulking beast you might expect

Delivers a strong all-round performance, with no real weaknesses. Within this price range you'll struggle to find a better TV

It has planted its flag in the super-continent that is mainstream LCD and has been a pragmatic supplier of populist plasmas.

Now Samsung wants to carve out some of the super-screen market for itself as well - but until it can produce monster-sized LCD substrates at reasonable cost, it seems content to proffer plasma - enter the PS-63P76FD.

Visually it's every bit the hulking beast you might expect.

The glossy, ultra-minimalist black bezel gives the set at least a modicum of predictable style, although it looks more like an overweight version of one of the brand's 32in LCDs than a genuinely-styled 63in panel.

The HDMIs are 'Anynet' compliant too, permitting the TV's remote to control any connected sources enabled with the 'CEC' industry communication standard.

Quite why the industry at large has elected to call CEC by a plethora of different names eludes me (Viera link, Bravia Theatre Sync, etc), but there remains broad interoperability (in a 'try it and see' kinda way).

The well-presented, if rather sluggish, onscreen menus provide an unusually wide selection of picture tweaks.

These should be employed with a certain amount of caution. Some of these tweaks cause more problems than they solve.

An Edge Enhancer tends to make images look harsh and artificial as contours become too dominant. I also noted that a Movie Plus Mode designed to make motion more fluid actually introduced distracting shimmering and flicker around the edges of moving objects.

Still, there are definite benefits to be gleaned from careful tinkering with gamma, white balance and black level boosting controls.

I was also rather impressed with the way Samsung's Digital Natural Image Engine processing option enhanced the appearance of standard-definition sources.

This is significant because a screen of this size is a ruthless canvas for anything less than high-definition and well worth noting if you have a large collection of DVDs.

Image quality is high. The set is compatible with 1080p/24 source material, be it HD DVD or Blu-ray, meaning that pans are more-or-less judder-free on film material.

The screen also sports a 48Hz mode that enables it to process the video at a non-artefact inducing multiple of the standard 24fps.

Where plasma traditionally scores over LCD is contrast. In that respect, this set isn't too shabby at all. It claims a paper specification contrast ratio of 15,000:1.

This falls only a fraction short of the industry-leading 16,000:1 figure quoted by Pioneer's remarkable Kuro range. Of course, anyone can go around quoting big numbers; it's another thing achieving them in reality.

The Samsung's real-world contrast is more akin to 298:1, as measured by our own independent Tech Labs, although this is not much less than that of Pioneer's latest plasma panels.

Samsung's high contrast claim, however, is a result of its Ultra FilterBright technology, whereby a filter built into the screen array is charged with removing up to 90 per cent of ambient screen reflections.

Given that 10- and 12bit colour processing is more the norm for a higher-end screen, it seems likely that the maths has been given a little marketing spin that doesn't make them directly comparable to rivals.

In terms of sheer value for money, this baby certainly delivers. In some retail outlets it comes in at a full two grand cheaper than Panasonic's Full HD 65in TH-65PX600, and nearly £4K cheaper than Fujitsu's 63in P63XHA51ES (and that's not even Full HD!).

Despite its aggressive price, there's not too much evidence of cut corners. It makes its Full HD status count when it comes to image clarity.

With a top HD source like the HD DVD release of Peter Jackson's King Kong, every leaf and branch within the jungles of Skull Island seems tangibly real. I felt as if I could step inside the action and take on the mighty ape myself.

To make the most of the set's two-million-plus pixel count I'd advise buyers to manually set the screen's aspect ratio to Just Scan, which removes all overscanning from the picture to enable direct pixel-for-pixel HD image rendering.

Toggling between this and the standard 16:9 option (which the TV annoyingly defaults to) clearly reveals extra sharpness and cleanliness in the image with the mode selected, providing an instant demonstration of just what a Full HD resolution can bring to the table with a television as vast as this.

The screen is kind to challenging colour reproduction. There was no sign of colour banding during the entire test period. I did note that there's a gentle orange hue when there should be rich reds and occasionally, some blacks look fractionally green. But once calibrated I felt happy with the balance.

Also undeniably impressive is the Samsung's black level response. The darkness of the Berlin Warehouse assault on the HD DVD of Mission: Impossible: III looks rich and three-dimensional; it's genuinely cinematic.

The Samsung easily outguns its rival Fujitsu 63in model in this area.

It's very difficult to make a self-emitting technology like plasma look bright on such a large screen.

While LCD utilises intense backlighting, a big plasma such as this can only rely on its gas-charged pixels. And I think it does a great job. In a brightly-lit room, I suspect the image would look a little dull, but lower the ambient light and the contrast and peak whites punch through.

Motion resolution can be considered good, although perhaps not quite as accomplished as Pioneer and Panasonic rivals.

If I had to find any fault with the 63P76's pictures, I'd say that really bright picture elements can cause a little image retention (though this will reduce over time).

One bonus of a screen this big is that there's a good stereophonic spread to the audio, which also manages some decent mid-bass.

Those looking for high-impact Full HD are well advised to audition this Samsung. It's a strong performer with no weak suite.

It is possible to get better performance from some of its rivals, but then you'll almost certainly pay more for the privilege. As a home cinema monitor I'd rate it above average and capable of an often thrilling performance.