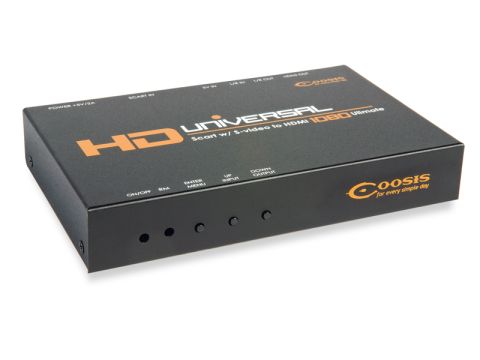 Coosis suggests that its HD Universal Converter is the solution to the 'embarrassment' of having standard-definition set-top boxes, games consoles and DVD players connected to an HDTV. Or you might simply be suffering from a lack of Scart inputs but have HDMIs to spare.

The HD Universal range is designed to convert analogue AV outputs to HDMI – in this case it's Scart or S-video – but the final versions will be composite PAL/NTSC-HDMI, Scart-HDMI, or component/Scart-HDMI.

The latter makes some sense as HD component video inputs aren't always available, and it's a straight HD analogue-digital conversion.

Upscaling from SD to HD usually requires Faroudja chipsets to get decent results, and the history of TV is littered with upscaling displays that didn't meet their grand promises.

This £95 metal box isn't quite the elegant package shown on Coosis's website and it has one obvious design flaw; the DC power cable plugs in across the Scart cable, so it takes a little force to get both in unless you're using a fancy Scart that doesn't attach at an angle.

There are analogue stereo input and output mini-jacks as well as the Scart, S-video and HDMI sockets. It can be controlled with three buttons on the front, or using the credit card-sized remote, but as you'll probably only set it up once this can be tucked away down the side of the sofa to discover in a few years' time.

The remote lets you turn the HD Universal on and off, switch between Scart and S-video, change resolution and screen mode, with 4:3, 16:10 and 2.3:1 supported for those who have odd-shaped TVs or want to fill the screen with stretched/squashed pictures.

It's very easy to get started, but we didn't notice any great picture improvement on our mid-priced 42in LG LCD screen compared with a regular RGB Scart input. But the audio did seem to clear up and gain some punch in conversion from analogue to digital, which was an unexpected bonus.

But we'd suggest either investing £95 in a better screen or HD source equipment – even an upscaling DVD player with HDMI output if you have a big DVD collection. Putting gizmos like this in the chain creates more downsides like clutter than the benefits it brings.