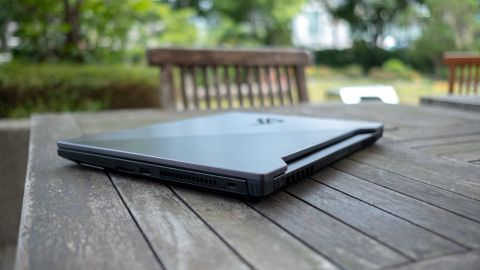 The ROG Strix Scar II may not feature major changes over its predecessor, but the ones Asus has made are significant, and if the new laptop delivers a similar level of performance it could be a great buy.

Among a raft of announcements at Computex 2018, Asus unveiled the ROG Strix Scar II gaming laptop. Unlike its counterpart, the Hero II, which is designed for online multiplayer gaming, the Scar is aimed at FPS gamers.

The ROG Strix Scar II is an incremental update rather than a major one, but it brings some important changes.

One of the first things you notice about the Scar II is its display. It's nearly bezel-less, and 2.3 slimmer than the one on the original Scar. The keyboard deck sports a camouflage pattern in line with the laptop's FPS credentials, while the exterior has a brushed metal finish.

The design and a sharp finish make this feel like an Ultrabook on steroids, although it's obviously not as light as one, and the Asus ROG Strix Scar II is one good-looking gaming machine.

There's a cut-out area at the bottom of the lid, which accents (and apparently helps) the cooling mechanism. The keyboard deck has a rubbery finish to it, which we're not sure is the best for either gaming or typing, and we're also not sure how well it will deal with sweat.

There's an RGB strip on the front edge of the laptop, something many gamers will love. This, along with the RGB keyboard and the glowing ROG logo on top, ensures a healthy dose of gaming lights, and adds a bit of flair to the otherwise stealthy looks of the laptop.

As mentioned the Scar II comes in GTX 1070 and 1060 versions, with either Intel's Core i7-8750H or i5-8300H, but perhaps the most welcome upgrade for gamers is that Asus has upped the screen refresh rate to 144Hz, which is a major boost.

The company claims its new twin-cooling fans will help to further enhance performance. Asus says it has increased the number of blades on the fans to  provide greater airflow.

These performance claims are difficult to assess based on two hands-on sessions with the laptop. Asus is certainly talking a good game here, but we'll need to put the ROG Strix Scar II through our full review process before we can deliver a considered verdict.

The Scar II comes with Asus' ROG Gaming Center software, enabling you to fine-tune various settings to optimize gaming performance; among other things you can choose between three fan modes and monitor the system's temperature.

For a budget-to-mid-range gaming laptop, the Asus ROG Strix Scar II certainly looks promising. The bump up to a 144Hz refresh rate is great to see, while the changes to the design are slight but meaningful. Asus won't be expecting anyone to upgrade to the Scar II from the original model, but based on our first impressions it should be in the running if you're looking for a new gaming laptop this year.

That said, we still have to determine how well Asus' new cooling system works, and whether the laptop's performance is as advertised – so watch this space for our full review.