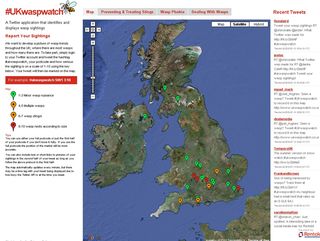 "Police in attendance confirmed it was only a thin bee"

We don't know if this is a joke, half a joke, an ironic attempt at doing a joke that appears to take itself seriously so is therefore extra funny, or what. But it's UK Wasp Watch and it wants to build up a "picture of wasp trends" throughout the UK. By listing individual wasp sightings on a huge, mashed-up map of the whole country.

If it's a joke it's quite a good one, although the inclusion of a logo for corporate exterminator Rentokil suggests large amounts of money and many thousands of man-hours of meetings were spent on its creation - just so we can see there's currently a rogue wasp on the loose in Suffolk. There should be a "Panic Button" to instantly alert authorities if it's a particularly big one.

Digital MP3 drugs through your ears

Another video that blurs the lines between "real" and "The Onion" is this report from US news resource Kansas News 9, which claims that "Digital Drugs" are taking over the brains of children - in a hot new trend known as "iDosing".

Kids are apparently taking drugs downloaded off the internet that arrive in MP3 form, if you believe this nonsense, giggling and going a bit crazy from listening to what sounds like an out-takes reel from a particularly depressing day in the BBC Radiophonic Workshop.

HIGH SCHOOL: Or this could be a trailer for a new Chris Morris TV show

The report includes an interview with some students about the issue, in which one girl says she heard it was "some weird demon stuff through an iPod" and that people were freaking out because of it.

This week's bizarre app news comes via the once properly popular and the now mainly ironically popular Scots folk singers The Proclaimers, who have made and released - or presumably paid someone to make and release on their behalf - an iPhone app.

iProclaimer lets users "learn how to sing and play the classic songs" of the duo, which is done via a simple little guitar-style chord and strumming interface game thing.

TRIBUTE APP: They should've released two versions of the app, both exactly the same but just looking slightly different

You also get an up-to-date list of all the gigs the guys are currently playing, if you're still wearing your fake glasses and singing their hits to yourself.

If you've got one of those wacky and/or madcap personalities and feel the need to show it off to others at every possible opportunity, Japanese hardware maker Maspro has the thing for you.

Or rather it has the thing for your house - a Mickey Mouse themed satellite dish. It's Mickey Mouse's 3D face on a dish, presumably with the face made out of a material that doesn't degrade the signal.

SKY PLUS: Wonder if it picks up Babestation?

Can you imagine how hilarious your house will look with that bolted onto the chimney? It'll tell all passers-by and potential visitors that a certifiably CRAZY time awaits inside your House of Fun.