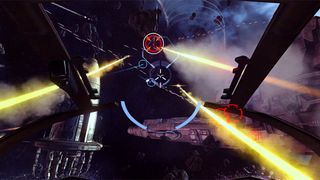 VR is (probably) going to be just fine

As we at TechRadar have previously established, everybody loses when technology is on trial.

So why does ZeniMax, the company that's suing Oculus VR for allegedly stealing virtual reality trade secrets, want to turn us all into losers?

Is the Oculus Rift really so unoriginal? And if so, why did ZeniMax choose now to bring its allegations to bear against the suddenly very successful VR company?

It's unclear who's really to blame, or whether this lawsuit has any merit at all. It might be an opportunistic grab at some of Oculus's newfound billions, but the courts may ultimately judge that the video game publisher is in the right.

It's far too early to tell how this fortress of cards will fall, so for now let's just break it down.

Oculus VR captured gamers' imaginations in 2012 with the Oculus Rift, a head-mounted display that did virtual reality better than anything seen before.

Company founder Palmer Luckey set out to make the most powerful virtual reality headset ever created, and he sought to keep it affordable for gamers. By all accounts he's on the road to success, and anyone who's used Oculus Rift can attest it is quite remarkable.

No doubt John Carmack - legendary game designer and creator of the Doom series of first-person shooters - agrees. In fact, he liked Oculus Rift so much he joined the company as CTO in 2013.

Carmack had been working on virtual reality at his company id Software, which some years before had been purchaseb by ZeniMax (the parent company of video game publisher and developer Bethesda, the studio behind games like Skyrim). And that's where all this trouble originated.

ZeniMax went public with its allegations against Carmack and Oculus in early May, claiming that Carmack took some code with him when he left the company - code that eventually found its way into the Rift headset.

In response, Oculus fired back with a statement that claimed "there is not a line of Zenimax code or any of its technology in any Oculus products" and, "John Carmack did not take any intellectual property from Zenimax."

Then, a few weeks later, ZeniMax took it to the next level and announced in a press release that it had filed a formal suit against Oculus.

So it seems Luckey, Carmack and all of Oculus VR will soon stand in a Texas court, accused of "illegally misappropriating ZeniMax trade secrets relating to virtual reality technology, and infringing ZeniMax copyrights and trademarks," according to Zeni's announcement. Then there are the claims of "breach of contract, unjust enrichment, and unfair competition against the defendants."

In other words, this is no joke.

They know too much

ZeniMax says it has "years of research and investment" in virtual reality, and that Carmack and Oculus "exploited" the company's "trade secrets, copyrighted computer code, and technical know-how."

Yes, apparently "technical know-how" is something you can own and/or steal, according to Zeni.

But the question on everyone's mind is why they'd bring this up now, well over a year into Carmack's stint with Oculus and a time when Rift has been shown at numerous trade shows, enlisted countless developers, and begun selling prototype units to the public.

The answer may be simple: Oculus struck blue gold when Facebook purchased it for $2 billion (about £1.1b, AU$2.1b) in March.

"Only after the Facebook deal was announced has ZeniMax now made these claims through its lawyers," Oculus said at the beginning of May. It's not worded as an accusation, but the statement hangs significantly in the air.

Is ZeniMax only trying to capitalize on Oculus's newfound wealth? Did the company see dollar signs when Facebook invested billions in virtual reality?

No one's yet disclosed the numbers involved in the lawsuit, but Zenimax probably isn't lowballing it. So what's going to happen if they win?

Next Page Which history will repeat?
See more Gaming news