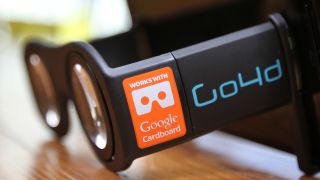 At Google's I/O 2014, the search giant announced Cardboard, a head-mounted display that runs on Android to power a fully-featured virtual reality experience that's made out of … you guessed it, cardboard.

After almost a year of availability, several third-parties have riffed on the original model, manufacturing their own Cardboard "compatible" headsets made out of such materials as plastic, wood and metal.

Google encouraged this sort of engagement with the tools out of the gate, but the openness of the project has caused somewhat of an unintended problem: the reins of quality control were lost across so many different headsets in the market.

Google Cardboard's Product Manager Andrew Nartker stated: "The challenge is that each viewer may have slightly different optics and dimensions, and apps actually need this info to deliver a great experience."

To remedy this, Google has whipped up a solution called Works with Google Cardboard. It's a badge of approval that will be stamped onto third-party manufactured Cardboard kits, which makes it easy to tell which head-mounted displays meet the standards required for users to have a hurl-free VR experience.

But does this mean that the Google Cardboard kit you already have is trash? Nope. Google is working on an update to the Cardboard app which will allow users to scan a QR code created by the headset's manufacturer to instantly set-up their experience to the best one possible.