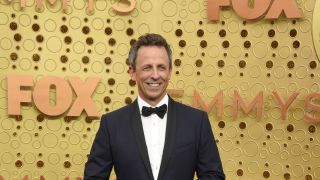 Seth Meyers' new Netflix standup special Lobby Baby may prove to be controversial – not necessarily because of the comedian's material, but the fact that you can skip certain parts of it.

The filmed Lobby Baby set will include jokes about the current American president, Donald Trump, that viewers will simply be able to skip over if they don’t want to hear them.

While the inclusion seems like a jibe at echo chambers and the reluctance of demographics to hear opinions they disagree with – something exacerbated by the way that digital algorithms tend to curate like-minded content for us – the ability of Netflix to add this as a one-off feature is actually quite radical for a TV streaming service.

Netflix, skipping, and the user experience

We've heard a lot about Netflix testing out controversial features in recent weeks – most notable a faster playback option to consume that sweet television content more efficiently, even if it is very much not what the creator intended.

The much-hyped Black Mirror episode Bandersnatch, too, managed to bake in an immensely complex branching narrative that relied on viewer input to push the story in certain directions, and it’s clear that Netflix is both willing and able to include viewing interaction and new and exciting ways.

Meyers himself has said that he doesn't expect people to use the button, saying that "I think, look, sometimes at a fancy restaurant they'll put parsley on your plate and you'll think, well, that's a nice touch, but you're not going to eat the parsley" (via CNN).

If anything, being told you can skip it may make you keener to see what you might be missing. It's concerning, though, that the technological capability now baked into Netflix’s interface could be used to tailor content to a microscopic level in future.

Why not a comedy set with entirely different punchlines, depending on the political affiliation of your profile? Or a content filter that removes the lewder jokes from a routine rather than removing the whole thing from a child's user profile?

Wherever Netflix ends up taking these features, we certainly expect to hear of more of them in the near future. For now, you can watch the trailer for Lobby Baby – which lands on Netflix November 5 – below.