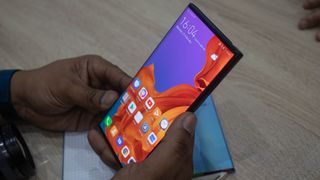 We've been expecting a Huawei Mate X release date any day now, when we can get the futuristic foldable phone in our hands – but it seems Huawei has already unveiled its successor, which will be known as the Mate Xs.

Huawei announced the Mate Xs at at event in China to celebrate the release of the Mate 30 and Mate 30 Pro, as well as a few other devices. The new phone is generally a spec step up in a few areas, and will be on sale (in China at least) in March 2020.

The main upgrade in the Huawei Mate Xs is the chipset, which will be Huawei's latest Kirin 990, instead of the 980 of the Mate X. We don't know many of the other specs of the Mate Xs, but judging by rumors, it could have the same camera array as Huawei's P30 Pro, as opposed to the Mate 20 Pro's snapper selection that the Mate X boasts.

When could we see the Mate Xs worldwide?

When the Huawei Mate X launched in February 2019, it had a Kirin 980 processor, the same camera array as the Mate 20 Pro, and of course its unique foldable design. However it was pushed back so far that these specs became a little outdated, and so an upgrade was in order.

TechRadar heard that the Huawei Mate X would launch with the Kirin 990 processor, as well as a few more upgrades from the February debut of the device; however the recent announcement shows that this upgraded device isn't the Mate X at all, but the new Mate Xs.

Does that mean people outside China will have to settle for a less powerful device, when the Mate X releases? Well, no – it's more likely that Huawei will release the Mate Xs outside China, but will call it the Mate X, leaving only the weaker device for tech enthusiasts in China who need the futuristic foldable phone immediately.

Saying that, the Huawei ban on Google apps means any future phone launch from the Chinese company is up in the air, as without the Google Mobile Services (GMS) package (including the Play Store and all other Google apps), an Android phone loses a lot of its functionality.

The Huawei Mate Xs release date is March 2020 in China, and it'll likely launch there before anywhere else, so it could be some time before we can try out the Mate X for ourselves. In the meantime, the Samsung Galaxy Fold is available to buy in most regions, and we're expecting the Motorola Razr foldable phone to be launched in mid-November too – so if you really want a phone that bends, these handsets might be better for you.