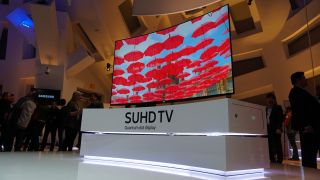 Samsung is making a new line of SUHD TVs with Quantum Dot technology, a bezel-less design and an integrated SmartThings hub … it's buzzword-heavy, I know, but stick with me.

The new series of displays, aptly named "Samsung SUHD Quantum Dot Displays," will rock an updated version of Tizen OS and make significant improvements in terms of contrast, brightness and color over 'normal' UHD thanks to 10-bit displays that utilize nano-crystals to douse the screen in vibrant shades of color.

So how else is Samsung going to get you to throw down on a new screen? This year's models - starting with the flagship KS9500 - integrate a SmartThings Hub into a 1,000nit screen capable of delivering increased contrast. That means whether you plan on watching in broad daylight or in your pitch-black mancave, you won't have to contend with glare ruining your perfect HDR image.

As you might expect, a TV of this caliber and this buzzword-heavy won't come cheap.

Availability wasn't disclosed yet either, I'm afraid, but that's sure to come out sooner rather than later.