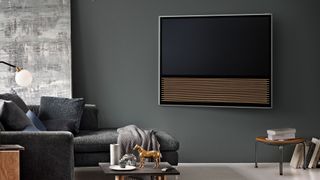 Bang & Olufsen are a brand best known for their speakers, but the company also has a smaller range of luxury TVs under its belt.

This BeoVision range is set to grow one bigger with the release of the company's latest 4K TV set, the BeoVision 14.

The BeoVision 14 is an Ultra HD LCD television with LED backlighting and is Google Cast compatible as well as offering streaming from online 4K services such as Netflix and Amazon Prime Video.

You can access these services with the TVs Android TV operating system.

The set contains the company's Automatic Picture Control sensor, which monitors the light and sound in a room and adjusts the television's output accordingly.

For example, if you turn off a light in the room, then the television might dim slightly to avoid appearing too bright in a darker room.

If partnered with a motorised stand (sold separately) then the television will rotate to match your viewing position.

Bang & Olufsen is a company famous for its speakers, and as such it's no surprise that the BeoVision 14's bottom third is dedicated three-way speaker set.

The set is not HDR-compatible, meaning that it will not take advantage of the increased range of brightness allowed by HDR content, and does not meet the standards for UHD Premium, a disappointing omission, especially at this price point.

The set will be available in 40 or 55-inch models, with a choice of either cloth or oak speaker covers.