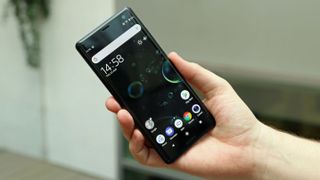 Sony's upcoming Xperia XZ4 may have an even wider aspect ratio than the 18:9 flagship phones we've seen become the norm over the last couple of years.

According to LetsGoDigital, the name "CinemaWide" has been trademarked by Sony at the European Union Intellectual Property Office. Although that doesn't give us specific insight to the feature, it does match with a previous rumor.

It gives further evidence the company will be adopting a 21:9 aspect ratio for the Xperia XZ4, which matches with something we've seen from a previous rumor.

The new trademark filing doesn't specifically mention the specs of the screen, but we've previously seen a leak that suggested the wider aspect ratio. It's expected to have a 6.5-inch display with a resolution of 3360 x 1440.

Sony has confirmed it will be hosting an event on February 25 at MWC 2019, so it may be the company is set to announce the next flagship phone there.

Other rumors of the phone include the fact it may sport a 52MP rear camera, 6GB of RAM and a Qualcomm Snapdragon 855 chipset inside.