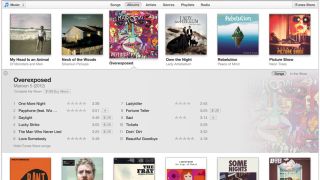 Don't expect to see this on your slate any time soon, Windows tablet fans

Windows 8 users waiting for iTunes to land might not want to hold their breath - Microsoft has said that Apple is not willing to bring its music application to the platform.

Speaking to CNN this week, Tami Reller, chief financial officer of Microsoft's Windows division, said that iTunes will not be available for Windows 8 users for the foreseeable future.

"You shouldn't expect an iTunes app on Windows 8 any time soon," she said. "iTunes is in high demand. The welcome mat has been laid out. It's not for lack of trying."

It looks like Apple isn't too keen on getting aboard Microsoft's Windows 8 UI, which would demand an app with a touch-friendly interface.

iTunes 11 is currently available for Windows 8 Desktop mode but those using the standard "Metro" interface can't access the application.

Microsoft currently has over 60,000 apps available on its own store, with around 250 million downloads by users so far.