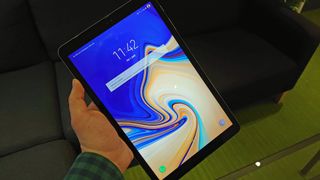 It looks like Samsung could be about to launch a new tablet - or rather, upgrade an old one - with leaked specs claiming to be for the Samsung Galaxy Tab A 8.0 (2019) hitting the web.

If you want a powerful tablet you're best off looking at iPads, but many people don't need Apple's powerhouses, and look to the more affordable end of the market instead – and offerings such as Samsung's Galaxy Tab A range.

German website Winfuture says it has got hold of a spec list for the upcoming tablet, which is set to replace the older Galaxy Tab A 8.0 model, and the list gives us an idea of what to expect when the tablet launches in the near future.

First up the leak says the Galaxy Tab A 8.0 (2019) display is set to be 8 inches – that's literally in the name, so we'd be very, very surprised if it turned out not to be true.

According to the leak, the Galaxy Tab A 8.0 (2019) will run on a Snapdragon 429 chipset, a low-end SoC (system on chip) launched in 2018 and designed for budget smartphones – so you won't be getting a huge amount of processing power in the slate, but its 'Tab A' title already gave that away.

Joining that chipset, the leak suggests the tablet will have just 2GB of RAM and 32GB of internal memory.

These numbers seem rather low, but with cloud storage getting more popular, internal memory isn't the most important thing any more. Saying that, 32GB storage is still rather low, but the specs list suggests there will be a microSD memory card slot to solve this issue.

Powering the Galaxy Tab A 8.0 is a 5,100mAh battery, according to the leak, which isn't exactly a huge power pack, but it'll easily see you through a long-ish flight or family gathering. There's also set to be a 3.5mm headphone jack – it seems Samsung isn't ditching the port in its slates that it is in its phones.

In terms of cameras, you could be seeing slightly worse specs than in the recent Galaxy Tab A 10.5, as while both have an 8MP rear camera, the older device had a 5MP front-facing snapper, while the 8.0 model apparently will only see a 2MP camera.

Tablet cameras always have lower resolutions than smartphones, so that's not exactly a huge surprise, and you'll be mostly using it for video calls and chats.

That's most of the important information about the tablet, and there's one thing left to know – is it worthy of your money? There's no way to know until it's been released, but stay tuned to TechRadar when it does for our expert reviews.

With a potentially new tablet on the way, it could mean the current Galaxy Tab A series are in line for discounts during Amazon Prime Day, which runs July 15-16.