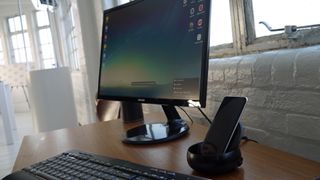 One of the most interesting new features of the Samsung Galaxy S8 is arguably the ability to use it like a desktop PC, but to do that you need to buy a Samsung DeX Station which has just gone up for pre-order in the US, revealing a $149.99 (roughly £120/AU$200) price in the process.

The DeX Station is listed on both Amazon and Samsung’s own website at that price, though Samsung claims it won’t be shipping until early May, while Amazon reckons it will be releasing the DeX Station by April 20 – just about in time to get it alongside your Galaxy S8 or Samsung Galaxy S8 Plus on their April 21 release date.

It’s a pricey bit of kit, especially since you’ll already have spent a lot on a compatible handset, but it could be worth the money.

The DeX Station lets you connect the S8 to an external monitor and use it with a mouse and keyboard, running apps in multiple windows on a big screen. You can also use it to remotely access your home desktop, and a fan built in to the DeX Station itself will help keep your phone cool throughout.

The DeX Station isn’t yet officially up for pre-order in the UK or Australia, but with the Galaxy S8 itself launching a week later on April 28 in those countries we might see it soon.

And prices could be similar to the conversions above, as some small stores, such as MobileFun in the UK, already have it listed at around £130.