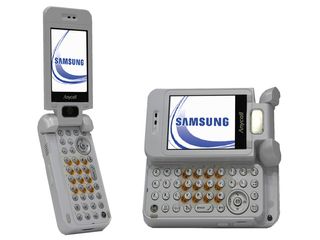 Phones like this will soon be surfing at broadband speeds in Korea.

As of this week, residents of Seoul, South Korea, are officially on the cutting edge of internet connectivity after a major telecoms provider there switched on a city-wide high-speed wireless internet blanket.

The new service, operated by Korea's largest telco KT , uses a technology known as WiBro to offer downloads to both fixed and mobile devices moving at up to 120km/hr at around 50Mbit/s. Considering the impressive transfer rates, it's hardly surprising that many consider WiBro, also known as mobile WiMAX, to be the fabled wireless broadband.

As with all wireless standards, special hardware is needed to use the KT service. Phones, such as the Samsung model pictured above, are likely to be the first beneficiaries of the WiBro switch-on, although laptops and other devices can use plug-in cards or adapters.

At the launch event, the firm's president, Nam Joong-soo, wasn't shy about the achievement. He boasted: "Amazing things that have been deemed far-off dreams are being realised here in Seoul."