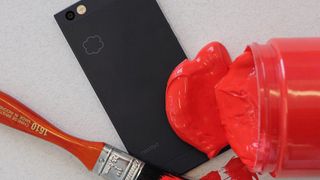 Nexbit Robin, the phone that "makes running out of space history" by storing unused apps in the cloud, is currently available in black, mint, and now, an ember red variation.

After weeks of teasing the new color— first during a recent livestream by the company, then in a series of tweets— it was finally confirmed.

Curiously, the focus of the stream wasn't centered around the red splashed phone, but about an upcoming feature that expands the cloud functionality to photos. Soon, users will be able to offload photos and manage them via web browser.

Cool, but not nearly as cool as the red Robin that was sitting idly on the table the whole time.

Periscope and Facebook Live viewers were taken surprise by the red device, so of course, it ignited a debate online about whether it's something that's on the way or if it's an experiment staying in the lab.

Shortly after the livestream, Nextbit tweeted a picture that shows a glop of red paint on a Robin. If this isn't a complete giveaway, we don't know what is.

Either way, we reached out to a Nextbit spokesperson for the official word, who stated on the record to TechRadar that "We are not announcing any new colors at this time. Robin is currently available in Mint and Midnight. Should we have a new color to announce, we'll be sure to reach out."