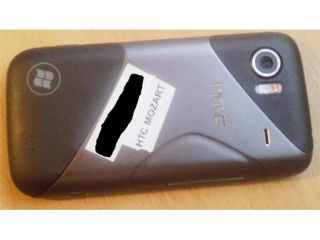 HTC's step into the wacky world of Microsoft's Windows Phone 7 OS looks like it will begin with a familiar-looking phone.

The HTC Mozart has been shown off in new pictures by Twitter user @Xmoo, who claims knowledge of HTC.

The phone will actually come apart on the back with a metallic casing interspersed with removable plastic coverings - giving it an odd jigsaw-like look.

The camera comes with what looks like a Xenon flash, but could be a well-disguised dual-LED effort, which would be much more in keeping.

The phone shown off clearly has the HTC Mozart codename all over it, but the first HTC Windows Phone 7 handset has been dubbed the Mondrian for a while, and recently surfaced as the Schubert too.

HTC is announcing a mysterious new device next month, and given the first wave of WP7 handsets should have an October UK release date, this is very much a candidate for an imminent unveiling.