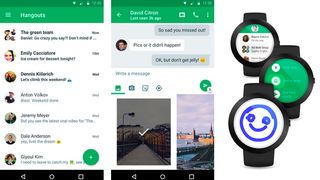 Say goodbye to that old, archaic Google Hangouts for Android, and make way for an updated version of the app that matches its Material Design theme with better functionality.

Google Hangouts 4.0, rolling out right now through the Google Play Store, looks cleaner, runs faster and, most importantly, fixes flaws that made the Android messenger unsatisfactory.

Before today, for example, you couldn't start typing a message, then decide to attach a photo. The "attach" button turned into the "send" button as soon as you started typing. Who designs like that?

The new Hangouts update features a row of shortcut buttons at all times: Take a photo, attach an existing photo, send an emoji sticker and share your location. Send is always present, too.

It's a lot easier to start a new message with a floating plus button in the bottom right corner or to find a contact in a streamlined list, and now starting a new Hangout from Android Wear is possible.

Where Apple still leads with iMessages

Hangouts 4.0 is a big improvement. It's Google's best way to close in on Apple's iMessages app that's preinstalled on iPhones, iPads and the Apple Watch, as well as Macs.

Believe it or not, the new Google Hangouts actually launched for iOS devices a month ago. Android is finally catching up to software on the rival platform.

However, Google's messaging team still has to work to do. Calls made through the Hangouts Dialer are "more affordable," according to the company, but it can still be confusing.

In an effort to fix this, Google says it now uses an Outbound Caller ID, so you friend won't get calls from "Unknown." We'll have to see if that fixes the problem when the app goes live.