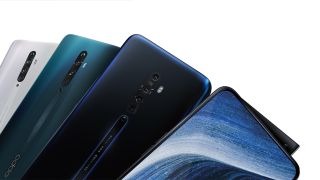 Oppo on Wednesday unveiled Reno2, Reno2 Z and Reno2F to its shark-fin popping Reno-series. Oppo chose India as the country for the global debut which is a rare thing for Chinese brands. Having said that, Oppo is amongst the top five smartphone brands in India and is very popular in tier-2 and tier-3 cities.

Oppo Reno2 is the purported successor to the Oppo Reno which was announced earlier this year. Not to be confused with the Oppo Reno 10x Zoom, which is still leading the Reno food chain.

It is powered by Qualcomm Snapdragon 730G chipset with an octa-core CPU and Adreno 618 GPU. The SD730G chipset offers 15% increase in graphics performance and brings a few of Snapdragon Elite Gaming features along with it such as support for HDR gaming. This is paired with 8GB RAM, 256GB storage and the setup runs on ColorOS 6.1.

The Reno2 comes with four cameras on the rear and a 16MP sensor tucked away in the pop-up "fin" mechanism. Oppo says that the front camera springs up in 0.8 seconds and supports bokeh effects for videos.

The primary camera on the Reno2 uses a 48MP Sony IMX586 sensor with an f/1.7 aperture and support for optical image stabilization (OIS). There's an 8MP wide-angle lens which gives a 116-degree field-of-view and a 13MP telephoto sensor with 5x hybrid zoom and 20x digital zoom. The last camera uses a monochrome sensor and assists in creating pictures with bokeh effect.

Oppo Reno2 has a lot of photography tricks up its sleeve such as ultra-dark mode, steady video and bokeh effects.

It comes with a 4,000mAh battery and supports VOOC 3.0 fast charging solution.

Oppo Reno2 has been priced at Rs 36,990 and will be available starting September 20 in India on Amazon.

Oppo Reno2 Z features a 6.53-inch AMOLED display with a 91.6% screen to body ratio. The bottom bezel is pretty noticeable on this one as opposed to the Reno2.

It has a quad-camera setup on the back which loses out on the telephoto lens and OIS. It instead makes do with two 2MP sensors-- one monochrome and one RGB, to assist in creating portrait pictures. The primary sensor and the wide-angle lens are the same as those on the Reno2.

On the front, the Reno2 Z has a 16MP selfie camera housed in a pop-up module as unlike the shark-fin on the Reno2.

The phone is powered by MediaTek Helio P90 chipset and is paired with 8GB RAM and 256GB storage. There's a 4,000mAh battery on board, just as on the Reno2.

Oppo Reno2 Z is priced at Rs 29,990 and will be available starting September 6 in India.

Oppo Reno2 F has the same AMOLED display, pop-up camera, 4,000mAh battery and the 8MP wide-angle lens as the Reno2 Z. However, a major change comes in the form of the primary 48MP camera which uses Samsung's GM1 sensor instead of Sony's.

The other change is that it is powered by MediaTek Helio P70 chipset which is paired with 8GB RAM and 128GB storage.

Oppo hasn't revealed the price of the Reno2 F but said that it will be available in November.