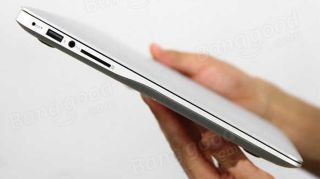 Thanks to a fresh leak, we now know more about the specs of Xiaomi's incoming laptop which bears a similar design to Apple's MacBook Air (such as its aluminum construction and tapered edge).

According to details on a spec sheet spotted by Benchlife.info, the notebook will run with an Intel Core i7-6500U processor (with a base clock speed of 2.5GHz and turbo to 3.1GHz, and a TDP of 15W).

Initial rumors at the start of the year pointed to a Core i7, but since then there was talk of cost-cutting with an Intel Atom CPU – and thankfully this isn't the case.

System memory will be 8GB and the laptop will come in 11-inch and 13-inch flavors, powered by Windows 10 (again, some previous speculation had pointed to Linux being used to save money). There will also be a USB-C port on board, which is good to hear.

So, some cost-cutting measures have been dodged it would seem, but one area where Xiaomi will make some savings is by avoiding a touchscreen.

Do note that these leaked specs are apparently for the 11-inch model, so it is possible that the larger variant will up the ante slightly with some components. Or maybe not – we'll just have to see, and we shouldn't have long to wait before an official announcement from Xiaomi.

Back at the start of the year, we spotted this notebook listed on Chinese e-tailer website Banggood and indeed it remains live on the site, albeit still listed as a 15.6-inch model, currently priced at the £550 mark (around $730).