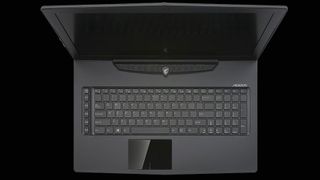 Aorus - we keep wanting to swap the o and u

The Gigabyte Aorus gaming laptop has hit CES 2014 and the dual GPU beast has attracted some admiring glances.

Let's face it, 17.3-inch powerhouse laptops are never going to be particularly portable, but at 2.9KG/6.4lbs and 0.9-inches (22.9mm) the Aorus is at least smaller than the average console, and can genuinely boast about the size given its innards.

Obviously, it's the Nvidia GeForce GTX 765M 4GB dual graphics that grabs the headlines, but let's not forget the Intel Core i7 processor.

You can plump for 4 or 8GB memory and there's a range of storage options to, ahem, boot. You can even decide on Windows 7 rather than the divisive Windows 8.

There's macro keys, a hugely handy Windows Key lock button and the nifty addition of controllable fans - so you don't have to choose to deafen everyone when you're doing something a bit less hardcore gamey.