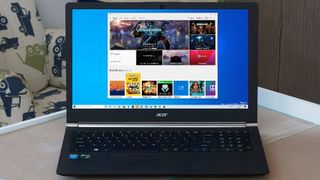 Windows 10’s store has long had a redesign in the works, but following substantial testing, the fresh version of the Microsoft Store is now rolling out to all users – but rather oddly, at the same time, the icon for the store has disappeared from the taskbar of Windows 10’s latest preview build.

As you’re doubtless aware, the Windows 10 November 2019 Update should roll out imminently, and as spotted by Winaero (via Softpedia), in the latest build of the desktop OS (18363.418) – supposedly the final release build – the Microsoft Store is no longer a default icon pinned to the taskbar.

This doesn’t mean it has been ditched from Windows 10, naturally, or indeed that you can’t manually add it to the taskbar. It just means that it isn’t present as a featured icon from the get-go, as it always has been in the past.

So what’s happening here? Is Microsoft somehow demoting the importance of the store?

That would seem an unlikely prospect, really, seeing as there are no other signs that Microsoft would want to diminish the importance of its store – and indeed has just given it a major redesign (we’ll discuss exactly what that overhaul entails in a moment).

What’s more likely is that Microsoft has accidentally ditched the icon, somehow; possibly due to a bug (which given recent Windows 10 history is a pretty believable scenario, let’s face it).

Although it is possible, perhaps, that a decision has been taken on-high to make more room on the taskbar.

We won’t know for sure until the November 2019 Update starts to officially roll out, when we can take another look at that taskbar and its default icons.

As for the fresh Microsoft Store redesign, Windows Central highlighted that this is all about updating the layout with new categories to make certain things easier to find.

So there are now separate sections for gaming, entertainment, productivity and deals (along with the main page), with various bits of hardware sprinkled across these different categories (the gaming section plays host to laptops like the Dell G3, for example, whereas you’ll find Surface devices and accessories like the dock and mouse under productivity).

As we observed last year, though, one of the biggest changes has been to highlight all the deals currently on the boil, so those browsing the store can easily find any juicy discounts on the likes of apps or games (or indeed the aforementioned hardware – Surface price cuts are quite a regular thing for Microsoft).

Note that this new version of the Microsoft Store is now fully rolling out, but it was partially rolled out previously, so some folks may already have it. If you don’t, though, you will have soon enough…