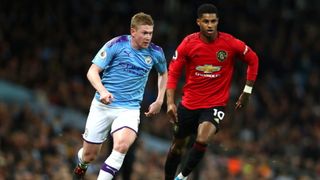 Having won the trophy in four of the last six seasons, it now feels unusual not to see Man City contesting the EFL Carabao Cup Final at Wembley. But can Ole Gunnar Solskjaer edge towards his first honour as United boss, or will Pep Guardiola's men gain the upper hand at Old Trafford? Don't miss a kick by reading our Man United vs Man City live stream guide below.

Their path to lifting the first piece of domestic silverware is far from straightforward this time out, with bitter local rival Manchester United standing in the way of the Sky Blues procession to north London.

Man United vs Man - where and when

The game itself kicks off today (Tuesday, January 7) at 8pm GMT (3pm ET or 12pm PT in the US, and 7am AEDT in Australia on Wednesday morning).

After steadying a decidedly shaky looking red ship with improved results in November and December, Solskjaer will be keen to get United back on track after an iffy start to 2020.

Still in search of their first win and first goal of the new year following a humbling defeat in the League to Arsenal and a disappointing goalless draw at Wolves, the Reds will be hoping for a bit of a positively to also negate the fallout surrounding Paul Pogba's seemingly likely departure in January.

The highpoint of United's turnaround at the tail end of 2019 came with a shock 2-1 win at the Etihad last month, and Guardiola will be keen to avenge that result here this evening.

So will it be United or City who'll be holding the advantage come Tuesday night? Read on to find out the best ways to watch the EFL Cup action in the UK and the rest of the world so you can ensure you can easily live stream Man United vs Man City.

Live stream Man United vs Man City from outside your country

Further down the page we have details of catching the Carabao Cup semi-final in the UK, US, Canada, Australia and New Zealand. All require some kind of subscription.

Not only is ExpressVPN the best all-round VPN for streaming, but as well as the 30-day trial you can also get 49% off and 3 months FREE if you sign up to an annual plan.

Sky Sports has exclusive live broadcast rights to the EFL Cup this year. Coverage of this all-Manchester clash starts on  Sky Sports Football and Main Event from 7.30pm. That means you'll need the Sky Go app for your phone or tablet if you're out and about.

If you're not a full Sky subscriber (and don't want to be), then you can also consider a Sports Day pass from Now TV for £9.99 and watch it on there. Or upgrade to a week or month pass that will get you both legs and is far better value.

If you're outside the UK for this one, then you'll need to download and use a VPN, log in to a UK stream and then use your Sky or Now account with that.

How to watch the EFL Cup: live stream in the US

Online subscription service ESPN+ is now picking up more and more momentum - along with a greater range of sports. Among its roster of top class sports tournaments it has exclusive access to is the EFL Cup.

Tonight's semi-final first leg is set to kick off in the US at 3pm ET or 12pm PT and you can sign up here to get access to it on ESPN+.

You're looking at a 7am AEDT kick-off on Wednesday morning Down Under, so you may need to find a way of watching this on your way in to work. If you do manage it, subscription service beIN Sport 2 is showing the semi-final live.

DAZN is a streaming service available in a select few countries including Canada. Luckily, it has secured streaming rights for EFL Cup football.