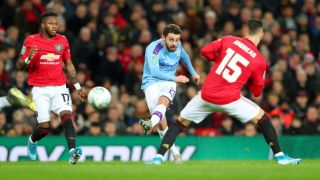 With pressure mounting on his managerial position, Ole Gunnar Solskjaer must lead his Manchester United side into what looks like an impossible mission tonight at the Etihad Stadium. Can United pull off a great comeback or will Pep Guardiola's men book their place at Wembley against Aston Villa? Don't miss a kick by reading our Man City vs Man United live stream guide below.

The out of form Reds must somehow reverse a 1-3 deficit away from home against their noisy neighbours Manchester City if they're to reach the EFL Carabao Cup Final.

Man City vs Man United - where and when

With Liverpool seemingly out of reach at the top of the Premier League table, City have placed a higher emphasis on the remaining cup competitions. Despite fielding a rotated squad, Guardiola's side played with real purpose during their 4-0 FA Cup thrashing of Fulham at the weekend.

With a Wembley final at stake, expect big guns Sergio Aguero, Kevin De Bruyne, Rodri and Raheem Sterling to all be in the starting line-up this evening.

While a gun-ho, all-out attack may seem like the only tactic that offers United a route to the final, committing men forward will likely suit their opponents. Don't therefore be surprised if United deploy three central defenders for the majority of the game.

Which of these two bitter rivals will edge closer to winning the first piece of domestic silverware this season? Read on to find out the best ways to watch this EFL Cup semi-final second leg clash in the UK and the rest of the world and ensure you can easily live stream Man City vs Man United.

Live stream Man City vs Man United from outside your country

Further down the page we have details of catching the Carabao Cup semi-final in the UK, US, Canada, Australia and New Zealand. All require some kind of subscription.

Not only is ExpressVPN the best all-round VPN for streaming, but as well as the 30-day trial you can also get 49% off and 3 months FREE if you sign up to an annual plan.

Sky Sports has exclusive live broadcast rights to the EFL Cup this year. Coverage of this all-Manchester clash starts on Sky Sports Football and Main Event from 7pm. That means you'll need the Sky Go app for your phone or tablet if you're out and about.

If you're not a full Sky subscriber (and don't want to be), then you can also consider a Sports Day pass from Now TV for £9.99 and watch it on there. Or upgrade to a week or month pass that will get you both legs and is far better value.

If you're outside the UK for this one, then you'll need to download and use a VPN, log in to a UK stream and then use your Sky or Now account with that.

How to watch the EFL Cup: live stream in the US

Online subscription service ESPN+ is now picking up more and more momentum - along with a greater range of sports. Among its roster of top class sports tournaments it has exclusive access to is the EFL Cup.

You're looking at a 6.45am AEDT kick-off on Thursday morning Down Under, so you may need to find a way of watching this on your way in to work. If you do manage it, subscription service beIN Sport 2 is showing the semi-final live.

DAZN is a streaming service available in a select few countries including Canada. Luckily, it has secured streaming rights for EFL Cup football.