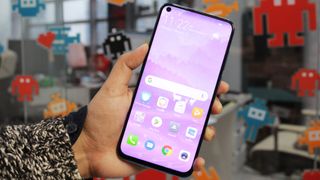 We’re only just starting to get used to punch-hole cameras but it seems their days are numbered, as several companies are already working on under-display cameras, including – most recently – Huawei.

Or at least, the company has patented an interface that seems to incorporate such a camera, suggesting that it’s at least looking into the idea.

Spotted by WinFuture, the patents show a camera lens in the top left corner of the screen, and while the lens seems somewhat visible in some of the images, in one there’s a phone icon directly on top of it, showing that there’s usable screen above the lens.

Other images show the area seemingly changing function depending on what you’re doing with your phone – there’s one that appears to include a ring of light around the lens, perhaps acting as a notification light, and another with the name of the camera mode you’re using placed beside the lens.

As ever, we’d add the usual caveat that patents often don’t develop into finished technologies and products, so just because Huawei has patented an interface that includes an under-display camera, it doesn’t mean the company will release a phone with one.

But sooner or later it and most other companies are likely to. Punch-hole cameras really feel like a stop-gap on the road to an all-screen design, and both Xiaomi and Oppo have already teased handsets with under-display lenses, so it’s likely only a matter of time before bigger brands like Huawei do the same.