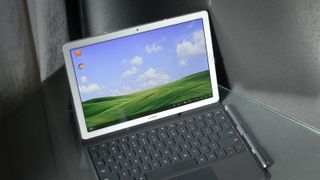 Currently Apple's iPad Pro doesn’t have much high-end tablet competition, but it could be about to get some more, as the rumored Huawei MatePad Pro looks like it could be a rival to the likes of the iPad Pro 11, and it’s set to be announced on November 25.

That date was put forward by Huawei CEO Richard Yu, who posted the below image on Weibo (a Chinese social network), teasing that a device with the MatePad name would land then.

He didn’t mention the Huawei MatePad Pro by name, but given that the slate has been rumored and leaked a few times now it’s the likely candidate.

Based on previous leaks we’re expecting this slate to support a keyboard and stylus, just like Apple’s iPad Pro range and the Samsung Galaxy Tab S6. But unlike those slates the MatePad Pro is rumored to have a punch-hole camera, giving it an arguably more modern design.

Not much is known about the specs of the tablet yet, but they’re likely to be high-end, given the ‘Pro’ in the name and the leaked design.

We should know all the details soon – assuming the MatePad Pro is indeed what’s coming on November 25. The biggest question though will be whether the slate even goes on sale in much of the world, as thanks to the Huawei ban that’s in serious doubt.