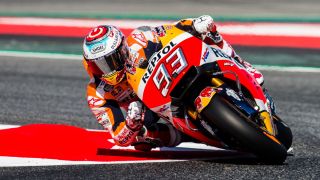 The 2019 MotoGP season is well underway and the action has been as excitingly close to the edge as Marc Marquez's knees have been to the tarmac. You can get a MotoGP live stream using this guide so you don't miss any of the high-octane action.

The eleventh race is due to start in Austria.

The Austrian MotoGP race is due take place between August 9 and 11 at the Red Bull Ring.

The MotoGP is the motorcycle racing World Championship top level to reach with all the big name manufacturers taking part including the likes of Aprilia, Ducati, Honda, Suzuki, Yamaha and KTM. All the machines in this class top out at 1,000cc but that's more than enough power for these finely tuned monster machines, which was clear when the top speed record was set in 2018 at 221.5mph.

The 2019 MotoGP is the 71st edition of the championship which follows on from last year's event where Honda's Marc Márquez took the win after 16 races. Andrea Dovizioso finished in second and Valentino Rossi ended up in third. This year the battle is as heated as ever.

To keep up with every knee-scraping turn you can watch all the action with this guide. Read on to live stream MotoGP 2019 from anywhere you happen to be in the world.

How to live stream MotoGP from outside your country

To see how you can live stream the MotoGP action in the UK, Australia, the US, Canada and New Zealand, read on further down this page to see the broadcast options. But if you want to stream the riding from outside your country, you may find that it's geo-blocked.

That's where a VPN can come in really handy. It's a piece of software readily available to download and install that allows you to simulate the IP address on your laptop (or mobile phone, tablet, streaming device, console, etc) so that it appears to be in a completely different country. Ideal, assuming that it doesn't breach any Ts&Cs from the broadcaster you're trying to tune in to.

That might sound complicated, by VPNs - or Virtual Private Networks - are actually surprisingly easy to operate. Simply select one of our top three best VPN picks below (or opt straight for our number one favorite ExpressVPN), open it up and pick out your country of choice from the 'choose location' menu, and then start watching as if you were sat back at home. Easy!

The other thing that makes Express worth knowing about is the fact that it works with loads of mobile devices (Including Android and iOS) and TV streaming gizmos (so games consoles, Roku, Apple TV, Chromecast, etc), comes with 30-day money back guarantee and 3 months FREE when you sign up for an annual plan. Click here to sign up to ExpressVPN.

How to stream MotoGP live in the UK

BT Sport 2 will be showing all the action this year live on TV. The BT Sport app will let you watch on various other devices, too, including laptops, Apple and Android mobile devices.

BT Sport is available for £6 per month to BT Broadband subscribers but for new customers packages that include broadband, and BT TV start at £35.99 per month.

Not in the UK this weekend? Fear not, check out our advice on using a VPN above, and it will let you watch the UK coverage from wherever on Earth you are.

How to watch the MotoGP in the US

For US race fans it's beIN Sports that is your go-to MotoGP coverage provider. That means you can watch via the app or on your TV if you have this available where you are.

Out of the US and want to watch the coverage? No worries - just use a VPN and register to a location showing the race.

How live stream the MotoGP in Australia

You're in luck Australia as the MotoGP is streamed on Network Ten, 10 Bold and Fox Sports. So hopefully there's an option in there that's either already paid for by your current subscription or one that you can get access to easily. 10 Bold, is free-to-air so should be ideal for most.

Apps mean you can access this from your chosen device wherever you are (although you'll need a VPN if you're taking that abroad).

How to watch a MotoGP live stream in the Canada

Just like your US neighbours, Canadians can enjoy the motorbike racing action on beIN Sports which has the rights to the races for 2019.

How to get a MotoGP live stream in New Zealand

In New Zealand it's Sky Sports that has bagged the rights to show all the 2019 MotoGP live. As you'll likely be aware, it doesn't come cheap. But there are ways of getting some cheap access.

New to the sport? Allow us to bring you up to speed (so to spoeak!):

The event has been around since 1949 making it the oldest motorsport championship in the world. The event travels the globe with nineteen races spread across fifteen countries and multiple continents. As such the nationalities of the riders are varied too, although for this class of racing all riders are over 18 years of age.

A Grand Prix event takes place over three days, with the first two of those for practice and qualification where riders need to qualify for a slot in the top-ten qualifying session by posting competitive times during any of the first three Free Practices. A second-tier qualifying then takes place with the slower riders on Saturday with the incentive of the top two making it into the top qualifying session.

You may also notice there is Moto2, for 600cc engines, and Moto3 for 250cc engines, both of which have a lower age minimum of 16, acting as a feeding line for new riders to make the mighty MotoGP when they come of age.