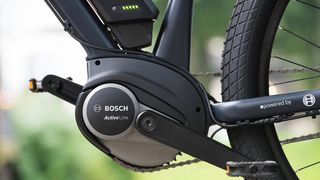 Eighteen years ago, I stopped cycling.

Specifically, my nine-year-old self swerved, tipped and flew over the handlebars, crashed helmet-first into my neighbor’s Mazda truck, leaving a dent in the tailgate (and my pride). I quit cycling after that.

So, last week, when Bosch invited me to try out its e-bikes on a quick jaunt through Central Park, I felt some trepidation, to put it lightly.

New York City mayor Bill de Blasio only lifted the ban on pedal-assist e-bikes two months ago, and I wasn’t certain my untested feet belonged on any motorized pedals except those in a car.

Reading about a TechRadar colleague hitting 30mph on an e-bike didn’t help, either.

I needn’t have worried. Spurred on by the unfailingly patient guidance of the Bosch representatives, I slowly relearned how to ride, and navigated my $2,200 Trek Plus (about £1,660 / AU$3,000) around cars, other cyclists and throngs of tourists without mishap.

Because of high price points, e-bikes aren’t necessarily meant for cycling rookies or dilettantes. But, they sure make it easy for rookies to find their balance and confidence.

An e-boost to riders' confidence

I met with the Bosch group during my lunch break at Columbus Circle; they had ridden their bikes up from Battery Park, near the Brooklyn Bridge, but none of them looked out of breath or particularly sweaty.

Two of the Bosch reps, Andy Ambrosius and Jonathan Weinert, rode in on some impressive bikes: Ambrosius on the Gazelle CitiZen T10 Speed, Weinert on the R&M Supercharger GX Rolhoff.

Chris Nolte, owner of Brooklyn e-bike ship Propel, had also tagged along on a foldable Tern GSD cargo e-bike. I hopped on the Trek Plus, the most bargain-priced offering available (relatively speaking).

Bosch doesn’t design or manufacture its own bike frames. Instead, it works with brand-name bicycle manufacturers to incorporate its motor, battery, computer and charger into the frame of select bikes.

All of Bosch’s e-bikes use pedal-assist technology, with five different support modes: off, Economy, Tour, Sport and Turbo. The higher the level of engine support, the faster your battery gets drained. Most Bosch batteries seem to last about 20 to 80 miles (32-129 km), though the Supercharger’s DualBattery doubles that range.

For someone as wobbly as me, Tour was about the fastest I could comfortably handle; both times I switched to Sport, it felt as though a sprinter was running behind me, pushing on my seat, and I quickly ended up falling sideways.

With Eco or Tour, though, I felt much more confident than with the motor off entirely.

For the cycling-disinclined, the first thrust of the pedal is the hardest. Keeping yourself upright once you’ve gotten some momentum isn’t too difficult, but starting off from a stop without immediately tipping over can be tricky unless you put enough strength into it from the start—especially uphill.

With Tour enabled, that initial push got so much easier. Ambrosius told me how internal sensors in the Drive units measure your pedal speed and force a thousand times per second, so it instantly registers that you’ve taken off and need a boost.

Unlike a thruster-based e-bike, it also will immediately stop boosting you if you take your feet off the pedal, handy if you lose your equilibrium.

Nolte gave me some pointers on keeping my balance and getting a good push off from the start. A US Army reserve veteran who returned from overseas with a serious back injury, Nolte discovered he could no longer ride regular bikes, but that with e-bikes he could hit trails again without having to put in a painful effort.

The hardcore cycling community can sometimes have a negative view of e-bikes, with some construing it as “cheating” to rely on drives to make it up hills with ease. And, it’s true that making it up the gentle slopes of Central Park felt almost the same as flat stretches, thanks to my engine.

Still, even beyond the benefits of a non-sweaty commute, I think this point of view loses sight of people with less natural strength, due to disabilities or old age, who would still enjoy the chance to ditch the car and cycle to work.

If you can afford an e-bike, there really isn't much of a downside to owning one. You can leave the engine off if you ever want a "natural workout", the engine noise is barely noticeable even on higher settings, and any parts that may break should be replaceable.

Once I stopped falling every 10 feet, I had a blast riding on an e-bike, and felt like I got a pretty good workout without getting too sweaty to return to work.

Will e-bikes catch on or fizzle out?

Nolte sells a wide variety of e-bikes in Brooklyn, but he says many of his most popular models happen to have Bosch tech inside. Bosch also makes tech that sits inside self-driving cars, electric car batteries and kitchen appliances.

Bosch's Weinert told me that e-bikes were only a “fraction of a percentage” of what his company focuses on, but that everyone remains “incredibly excited” by the technology.

A German company, Bosch offered its 100,000 German employees a discounted lease on e-bikes to encourage an emissions-free commute for its workers.

E-bikes have yet to catch on in the United States like they have in Europe. An industry research report stated that in 2016, around 35 million e-bikes sold nationwide, but US buyers may have only bought around 200,000–250,000 in 2016.

Yet Bosch seems bullish on the US market growing exponentially in the near future. According to Weinert, Bosch projects that the US e-bike market will match other European nations in sales within the next five years.

E-bikes are already popular in New York for delivery workers, though many tend to use cheaper, illegal "throttle e-bikes" instead of more upscale pedal-assist bikes. And e-bike ride-share startups like JUMP are already starting to take over major US cities like San Francisco and Washington, D.C.

Now that New York is open to e-bikes again, it could be a huge growth area for legal e-bikes and ride-sharing. Citibike uses standard bikes, but has 140,000 annual members and countless other daily riders.