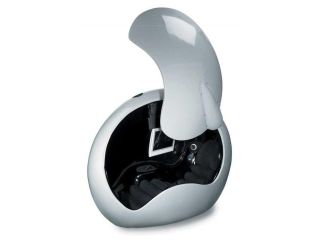 Designed by Lee McCormack and engineered by McLaren Applied Technologies, the Ovei media pod is the ultimate in 'must-have' home cinema accessories.

It may look like a Clockwork Orange stage-prop, but the Ovei is actually a home personal cinema system for one.

Originally billed as the Oculus, the pod has been six years in the making. The latest version was showcased at this year's CEDIA, and it's the first time it has been shown in the UK. TechRader managed to get beyond the throngs of people ogling the object and had a quick trial of it.

For gaming and home cinema use

Two Oveis were on show: the first was a modified version of the system complete with steering wheel and pedals for gaming use. This particular model we saw was actually modified for use by Lewis Hamilton.

The second was for home cinema use. Lie inside the air-conditioned pod – which uses an F1 and NASCAR climate control system – and you can have a very unique cinema experience. Once inside the pod, everything is controlled by the touch screen panel.

An Ovei spokesperson told us about the pod: "We've had a lot of interest in the product already. A lot of people have been asking if they can take one home now, but the thing about the Ovei is that it's custom-made to each specific client's specifications.

The Oveis are made in the UK and can be shipped throughout the world."

Such luxury does come at a price, though. The Ovei is available now for £50,000.