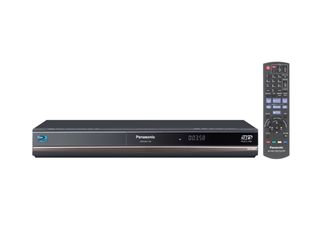 Panasonic BDT100 - for all your 3D needs

With the DMP-BDT100, Panasonic has extended its 3D Blu-ray proposition down to the mass market. While the the brand's first player, the DMP-BDT300, was a highly-polished performance machine, this model not so much cuts corners as neatly bevels them.

Perhaps the first thing you need to know is that this player has been designed to work in an HDMI 1.4 environment. There's no secondary HDMI output or analogue audio bank to deliver lossless audio into legacy equipment.

It's been positioned at those who simply want to connect the player direct to a 3DTV; if buyers also hanker for lossless DTS-HD MA or Dolby TrueHD they'll need to spring for a new AV receiver with HDMI v1.4, or take advantage of an all-in-one system with ARC (Audio Return Channel).

The unit itself is smart enough. A fascia flap lowers to reveal an SD card slot and USB port. The latter can be used with Panasonic's DY-WL10 Wi-Fi adaptor (sold as an optional extra), if you don't want to use a wired network connection.

With its DLNA branding you might expect the BDT100 to smugly play all media across your network – but you'd be wrong. If you have one of this season's Panasonic Blu-ray recorders on your network, the BDT100 can access and play content from that machine. However it cannot play media across a network (even though it lets you browse to UPnP devices).

File playback only extends as far as an attached USB device. My standard assortment of AVIs and MKVs could all be played once moved to a USB flash drive.

Although supportive of BD-Live, the player has no internal memory onboard (so you'll have to provide your own).

In addition to BD-Live, the BDT100 can access the Blu-ray version of Viera Cast (it's worth noting that this does not have identical content to Viera Cast on TVs). Picking are relatively slim. Attractions includes YouTube, Bloomberg, Daily Motion, Weather and Picasa.

There's also a fair amount of German content (Tagesshau, Bild.de, Q-Tom), which may be of interest to Brunhilda, who lives down the road.

Performance-wise the BDT100 dazzles like Christine Brinkley's dental work. It may not deliver the same video performance as the BDT300 (measurable characteristics are quite different) but I would still regard video quality as excellent.

The player is also surprisingly refined as a CD spinner. We measured audio jitter at just 313.8ps and the levels of the dedicated stereo output are matched within 10 millivolts; the BDT100 may not be audiophile-grade (dynamic range peaks at 91.7dB) but imaging is spacious and enjoyable.

Tweakers should investigate the 96kHz Re-Master modes (accessible from the handset) which subtly tailor frequency response.

The BDT100 represents an inevitable and welcome broadening of Panasonic's 3D player line-up – and both video and audio performance can be considered top-notch.

However I would still expect this player to struggle against its better-specified competition. The DLNA functionality is limited and online content available via Viera Cast lags behind that of online offerings from Samsung and Sony.

The Panasonic DMP-BDT100 UK release date is August and will cost around £250.

To learn more about the BDT100, head over to HomeCinemaChoice.com.