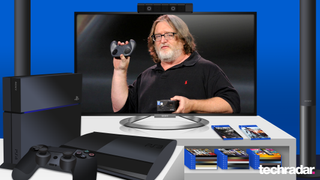 So about that headline, which I grant you would have been a preposterous thing to read, and indeed write, as little as eight days ago. I'll get onto that in just a sec.

Before that; well hello there! I'm TechRadar's new PlayStation Gamer columnist, which is a thing now.

I'll be waiting here for you every Tuesday, offering insight on the latest exciting PlayStation developments as well as the occasional calamity.

Throughout my career I've covered games for both business and consumer publications, which I think has helped me grasp the uniquely intimate (and sometimes hostile) relationship between hyped-up hardcore gamers and the industry's buttoned-down decision makers.

I've personally found that, the more you speak to those on either side of the divide, the clearer a sense you have of what lies ahead.

Which brings me to the absurd suggestion that Sony could soon open up its twenty-year vault of PlayStation software and hawk its goods to PC gamers. Yes, that means selling PS3, PS2 and PSOne games to those who, potentially, have never owned a single PlayStation system. Just a couple more seconds and I'll get to that – bear with.

Before that; Seven days ago at a CES 2014 press conference in Las Vegas, Sony revealed PS Now, a cloud streaming service that is essentially the Netflix of PlayStation. A catalogue of two decades' worth of Sony games will run somewhere, out there on a server farm, with the visuals streamed to numerous devices.

Even in the modern age of games, it is an idea of extraordinary ambition and possibilities – a cornerstone moment in the industry where a console company no longer thinks in terms of consoles.

PS Now will stream even high-end PS3 games (such as the acclaimed The Last of Us) to Sony Xperia phones and tablets, Bravia Smart TVs, PS Vitas and PS4s. When it launches across the US this summer, gamers will be able to rent individual titles or access the whole library via a subscription.

In a nutshell: With PS Now, you can play games instantly across multiple devices, similar to the way you might stream Netflix. You'll be able to use PS4, PS3, and PlayStation Vita as well as non-PlayStation devices, beginning with 2014 Sony Bravia TV models and then other Internet-connected devices. You'll always play the most updated version games without ever having to downloading a patch or update.

As expected with such a disruptive idea, a rash of questions has spread. Won't there be a noticeable lag when streaming these games? How much will PS Now cost? How fast does my internet connection need to be? Surely there will be a lag? Will PS Plus subscribers get it for free? Does the service only offer first-party games? When is it coming to Europe? Seriously, there's going to be lag isn't there?

PlayStation executives have responded candidly to these questions: They honestly don't know. The business model is up in the air, the servers haven't been publicly tested yet (a beta trial is due this month), and the range of games on offer has not yet been finalised.

Doesn't this make the PC not an absurd destination for PS Now, but an obvious one?

There's another question, however, with far wider-reaching consequences. Sony has stated that "eventually PS Now will expand beyond PlayStation platforms and Sony devices, allowing users to stream PlayStation games on numerous other internet-connected devices", which in itself is an astonishing claim for a platform holder to make.

So then, where is 'beyond'? Certainly there's already a tacit understanding that Sony wants PS Now on iOS and Android devices.

Personally I'm not convinced this service will lure in smartphone and tablet owners – despite, I grant you, there being about a billion of them. Firstly because, whether it's an Xperia tablet or an iPhone 5S, these devices are an unfixed and undersized window into games that were built for sofas and TVs.

Secondly, because you'll need a DualShock 3 to play the games (which, even if Apple does somehow support it, will severely restrict its potential). Finally, because mobiles already offer an oceanic catalogue of apps perfectly suited for one-thumb gameplay.

But there's another potential audience here – a gargantuan reserve of hardcore gamers, in fact, who would love to play the likes of Ico and The Last of Us if given the chance. According to Valve, there are about 65 million of them at least, and they pay for games all the time. They're the PC gamers.

They all own fixed monitors and desk chairs, most of them know how to pair a PS3 controller, and according to Steam stats, a quarter of them have internet connections above 10MB (that's double the recommended PS Now speed). Doesn't this make the PC not an absurd destination for PS Now, but an obvious one?

The brilliant thing about future technology is that it always seems unthinkable until it finally arrives.

Like when cloud gaming company OnLive first made those audacious promises about lag-free game streams on PC, or when Double Fine dared the internet to fund its own game project, or indeed, when Valve first suggested it may build its own games console.

And now, during the same week in CES when Valve unveiled its line-up of Steam Machines, designed specifically to challenge for space under the TV, Sony has revealed a service that could soon compete on desktops. Yes it sounds fanciful, at least it does at first, but I'm guessing it won't be the last time I write about it in the weeks ahead.