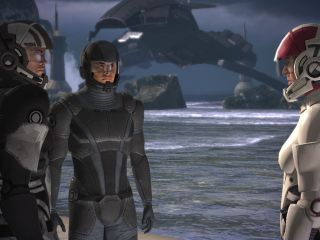 Mass Effect - one of BioWare's hits

Developer BioWare has revealed that its aim for every game it releases is to sell 10 million copies globally, showing the growing media might of the gaming world.

Bioware is the developer behind hits such as Mass Effect and Dragon Age, but it is its forthcoming

that is garnering the most interest, with the MMO widely tipped to provide a real rival for industry giant World of Warcraft.

But for those that doubt the growing power of gaming, the 10 million target should show the scale of the industry.

BioWare vice president and co-founder Greg Zeschuk revealed the figure in an interview with Video Gamer.

"We do Top 10 games, our stuff is quite successful. I know Mass [Effect 2] is number eight so far this year, in North America.

"Sometimes I'm facetious when I say some of those things, knowing that we can sell a few million but seeing that someone else can sell 25. You're kinda like, 'Well, that's a hit!'"

Zeschuk jokes that managing to sell half as many subscriptions to the public as Blizzard have managed with World of Warcraft would be a major success.

"We always joke that if we only do half as well as Blizzard on Star Wars: The Old Republic, we'll be quite satisfied, he added.