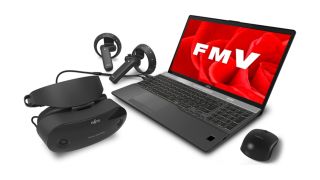 We’ve seen quite a number of Windows Mixed Reality headsets unveiled in recent times – from the likes of Acer, Asus, Dell, HP, Lenovo and most recently Samsung – and it appears Fujitsu is jumping on this particular Windows 10 bandwagon with its own offering.

Revealed at rather the last minute, considering that these HMDs are supported by the Fall Creators Update which begins rolling out today, the seemingly still-to-be-named Fujitsu headset runs with a pair of 2.9-inch LCD panels with a resolution of 1440 x 1440, refresh rate of up to 90Hz, and a field of view of up to 100 degrees.

It will be sold with a pair of wireless (Bluetooth) controllers, and benefits from a visor which can be flipped up, all of which is pretty standard for these devices.

The device runs with a rather plain design which aims to appeal to Japanese tastes, so is more understated compared to the current crop of Windows Mixed Reality HMDs which may be a little too flashy for this particular market.

Alternatively, Fujitsu is going to sell this mixed reality package bundled with a laptop powerful enough to run the VR experience smoothly.

The notebook in question is the Fujitsu FMV LifeBook AH-MR/B3, which has a 15.6-inch HD screen driven by an Intel Core i7-8550U processor, and according to Engadget Japan (which spotted the Fujitsu press release), it’s a ‘relatively high performance’ model (presumably with a discrete GPU, although no further specs are mentioned aside from the CPU).

The recommended spec for the headset in ‘Windows Mixed Reality Ultra’ mode (running at the full 90Hz, rather than just the base 60Hz) calls for a minimum of an Nvidia GTX 965M, so we can expect a GPU at least as powerful as this (likely more).

The laptop and headset/controller bundle will obviously be considerably more expensive, and will apparently pitch up at ¥240,000 (around £1,620, $2,140, AU$2,730). The headset should be out in November in Japan, with the notebook bundle to follow in mid-December.