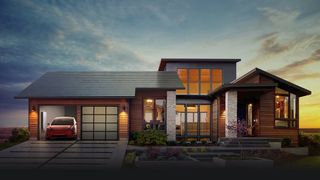 This saving doesn’t even take into account the saved energy costs – “electricity”, he said, “is just a bonus.”

According to Bloomberg, Musk said “the basic proposition will be: Would you like a roof that looks better than a normal roof, lasts twice as long, costs less and—by the way—generates electricity?”

It should be noted, the roof shingles themselves are still high-end products and expensive to produce – in fact, the shingles designed to mimic terracotta and slate could cost up to 20 times more than regular asphalt shingles.

The majority of the cost savings Musk reports will actually come from shipping the products rather than manufacturing them. Shipping costs for traditional roofing materials are high because they’re fragile, heavy, and prone to breakage. Tesla’s tempered-glass tiles will have the advantage of weighing much less than these traditional materials and being much easier to ship.

Last month Musk showed off four homes outfitted with the surprisingly good-looking textured glass solar tiles, and if they do turn out to be as affordable as Musk claims this could transform the solar power market. A roof that won't cost you any more to install but could save you money in the long run? Musk said it himself: “Why would you get anything else?”