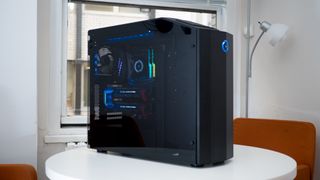 Corsair has bought up Origin PC, a US-based boutique gaming rig builder which has come up with some pretty innovative concepts – most recently a high-end PC that combines multiple consoles within its chassis.

Origin PC isn’t being swallowed whole by Corsair – which already makes its own PCs, and a raft of components and gaming accessories – but rather will remain as a standalone brand within the organization.

So what practical difference might this make to those of you who could be considering purchasing an Origin PC machine in the future?

Obviously we can expect Origin PC to use more Corsair components in its builds, obtained at a more favorable price, and with any luck some of those cost savings could be felt in the pockets of consumers.

Corsair also produces iCue, software that manages custom lighting setups in gaming PCs, allowing for the syncing of RGB lights, as well as taking care of performance monitoring, such as keeping tabs on temperatures and fan speeds.

The initial announcements made were that this iCue system will be built into Origin PC machines, along with Corsair Hydro X custom liquid cooling solutions. And both firms promised further Corsair products will be integrated in Origin PC rigs in the future, naturally.

The traffic won’t all be one way, either, as Origin PC will soon be selling the Corsair One range of PCs.

As for the high-end PC we mentioned at the beginning of this story, if that piqued your interest, the Origin PC Big O combines a blisteringly fast set of gaming components with an  Xbox One X, PS4 Pro, and a Nintendo Switch, all in the one case.

If you like the sound of this revolutionary rig, the bad news is that it probably won’t ever go on sale, being more of a marketing exercise for Origin PC’s 10th anniversary (just to show that it can be done, more than anything).