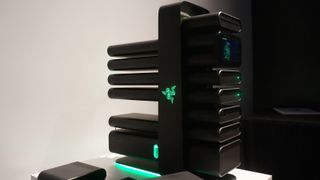 We got an update on the status of Christine during a recent interview with company CEO Min-Liang Tan, and it's not auspicious news. Those hoping for Christine to hit the market soon may want to look away from their screens now.

"The challenge is that it's not something we'd like to undertake alone," Tan said. "We've had conversationis with OEMs. It's not entirely promising right now because OEMs are excited about pushing products and not really innovating on that front."

There is a bright spot on the horizon, however.

"We've had good conversations," he offered. "We'll have announcements through the end of the year. We're hoping to get two to three OEM partners on board."

Tan has spoken about the difficulty of getting other companies to sign up as Project Christine partners before.

He talked with Polygon in March at length about the issue, attributing the lack of industry support to OEMs putting greater importance on profits and high returns than on meeting consumer clamor for the pick-and-pull PC.

OEMs' attitudes don't seem to have changed too dramatically since then.

The only way for Project Christine to succeed as Razer envisions it is for it to be an open platform with several, if not dozens, of companies participating. Tan has been adamant about keeping the door to Project Christine wide open, and it doesn't look like he plans to lock it anytime soon.