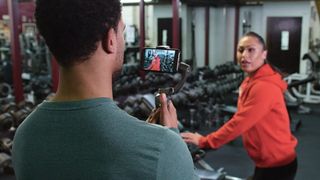 Benro made its name producing conventional tripods and heads for the everyday photographer, before doing what most accessory manufacturers end up doing, namely branching out into filters, bags and other essential bits of kit.

But with its latest 3XS Lite gimbal, the company has returned to its first love of camera stabilization – this time with mobile videographers as its target audience.

Gimbals for phones are nothing new, but the 3XS Lite has a party trick up its sleeve, with a press of a button spinning its clamp round between portrait and landscape orientations.

Aimed at vloggers, film and photography students, and sports and action photographers, the three-axis gimbal is said to be one of the smallest on the market, with a weight of 430g and the ability to be folded down for easier portability.

Benro reckons it's a perfect partner for smartphones weighing up to 290g, which comfortably covers current flagships like the Samsung Galaxy S10 Plus and iPhone XS.

Its handle is decked out with controls for the camera's shutter, video recording, zooming and focus, while a 3.5mm port allows you to hook up a microphone for better audio capture too.

The base has been furnished with a 1/4-inch thread to enable it to be placed on a tripod, while the internal 2000mAh battery provides enough juice for 24 hours of use.

Benro has also developed a companion app, which is primarily on hand to enable panoramas, timelapses and object tracking, but also enables the gimbal's performance to be fine-tuned and its firmware updated.

The Benro 3XS Lite is launched alongside a more senior 3XS model that additionally allows you to charge your phone from its built-in battery, both via a wired connection, and wirelessly via a charging pad integrated into the clamp.

The 3XS Lite is priced at $99 in the US and £90 in the UK, while the 3XS – which, at least for now, doesn't appear to be available in the UK – costs $129. Pricing and availability for Australia have not yet been made available.