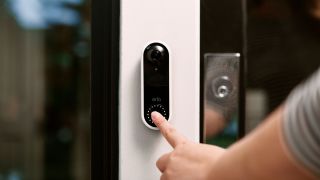 Smart home security brand Arlo has announced its first ever video doorbell, which boasts an industry-leading 180-degree view that could rival the likes of the Ring Door View Cam.

According to the company, the Arlo Video Doorbell is "designed to capture what traditional video doorbells can't," with a vertical field-of-view that gives you a bigger, more precise picture of your front porch.

It captures footage in a smartphone-friendly square aspect ratio, which means you can see things like parcels left on your doorstep, while HD video keeps the footage clear.

Other cool camera features include night-vision, motion detection and alerts, digital zoom, and tamper detection – which sounds a siren if someone attempts to remove the doorbell.

What about the price?

The new video doorbell also comes with two-way audio, allowing you to have conversations with whoever is at your door. As well as this, the Arlo Video Doorbell can deliver direct-to-mobile video calls and alerts when packages, people, animals, or vehicles are detected.

This means you can quickly reply to your delivery driver as well as warding off would-be intruders (or any neighbourhood pets that keep getting through your cat flap and eating your cat's dinner).

As it connects to your mechanical or digital doorbell, it should prove fairly easy to install, and will receive continuous power through the existing wiring.

According to Arlo, the Video Doorbell will launch in early 2020, with pricing still to be confirmed – however, we do know that buyers will receive a complimentary three-month trial of Arlo Smart, which gives access to 30-days of cloud recordings so you can store and view video clips.

If Arlo can undercut the Ring Door View Cam's $199 / £179 (around AU$340) price tag, it could represent some real competition for the current market-leader. For now, we'll have to wait until pricing for the Arlo Video Doorbell is announced to find out.